Preparations for the 2022 FIFA World Cup started in Qatar some time ago. As the tournament approaches, all eyes are on this Gulf nation. Eight brand new stadiums, each with their own unique and interesting designs, have been constructed for the all-important games. Whether you plan to go to Qatar or watch the action on television, here is Mundana’s guide to Qatar’s World Cup stadiums. 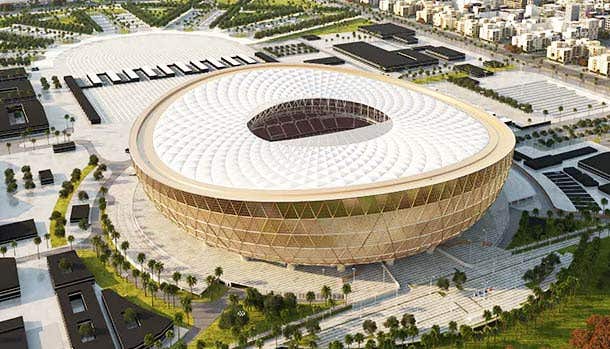 With a capacity of 80,000, Lusail Iconic Stadium will host the most prestigious game of all: the final. Lusail is a planned city, located about 15 km north of the capital Doha. The stadium will become one of this new city’s most recognisable landmarks. The design is a nod to the past. The decorative motifs that feature on its golden façade have long been characteristic adornments throughout the Arab world. Architects Foster and Partners were also responsible for projects such as The Gherkin in London, Beijing Airport and the Millau Viaduct. Here, they have created a fabulous stadium that evokes the light and shadow of a lantern on a grand scale.

The all-white Al Thumama Stadium is a triumph. Located to the south of Doha, it can hold a 40,000 crowd. Its elegant, circular design echoes the gahfiya, a traditional woven cap that’s a common sight across the wider region. The stadium was designed by Qatari architect Ibrahim M Jaidah of the Arab Engineering Bureau. He studied the patterns on numerous caps before settling on the one that would feature on the stadium itself. It’s not only aesthetically pleasing. The cap-shaped roof will keep the sun off spectators’ heads just as the headgear does when worn. After the tournament, the upper stands will be converted to a boutique hotel.

From the reveal of its design in 2014 to its completion in 2020, this stadium has captured fans’ imaginations. During the World Cup, up to 40,000 people will cheer on their teams from the stands. Afterwards, it will play an even more important role in the sport. Half its seats will be stripped out and shipped off to developing nations. There, hopefully, they will used in venues to help inspire a new generation of players and spectators. 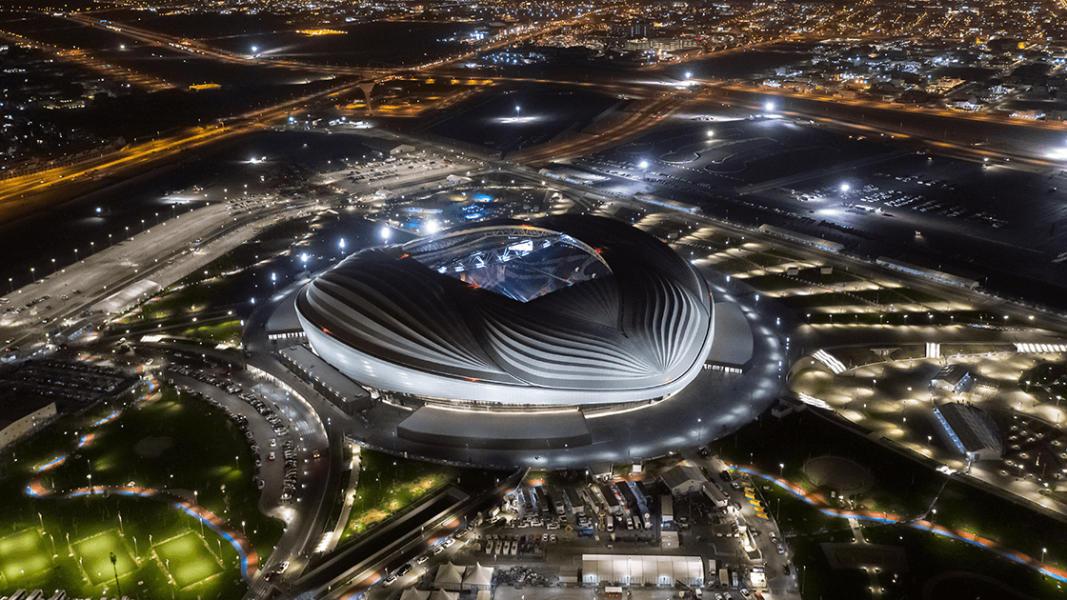 Award winning Zaha Hadid’s talented team created this spectacular stadium design for the Qatar World Cup. The late British-Iraqi architect was known for her bold, futuristic ideas, and this is no exception. The oval building has a feminine elegance about it and sits at the heart of Al Wakrah, an area south of Doha once associated with pearl fishing. Dhows on the water inspired the flowing lines. Inside, there’s another nod to the area’s maritime heritage in its resemblance to a ship’s hull.

This refreshed venue graced Qatar long before FIFA awarded the country the right to host the 2022 tournament. The stadium has been modernised for the occasion and now sports a canopy beneath its iconic arches and LED pitch lighting. Since its inauguration back in 1976, the stadium has hosted events such as the Asian Games, the Arabian Gulf Cup and the AFC Asian Cup. It forms the centrepiece of the Aspire Academy, an organisation which helps to create Qatar’s sports successes of the future. The 3-2-1 Qatar Olympic and Sports Museum forms part of the same complex, while you can see the imposing Torch Doha hotel from the stands.

This impressive stadium sits on the edge of the desert in Al Rayyan. It replaced a smaller stadium and like its predecessor takes its name from the former Emir of Qatar, Ahmad Bin Ali Al Thani. Danish architectural firm Ramboll reflected aspects of that landscape. The structure in many ways resembles an ornate tent, with desert flora and fauna in the design. The new stadium not only offers increased seating, but there’s also more shade too, which will be welcome on hot days. As with the Education City Stadium, around 20,000 seats will be donated to developing world projects as part of its sustainability legacy. 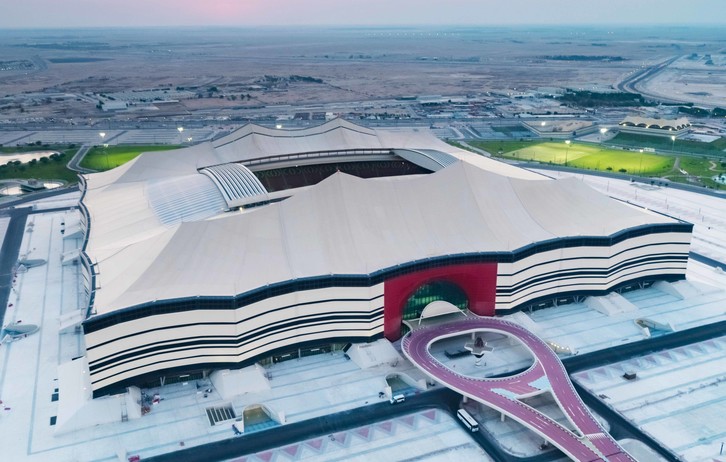 This spectacular venue is where the action will kick off. One of the larger stadiums, it has a capacity of 60,000 and the atmosphere is sure to be electric as a result. The tent-like appearance is of course deliberate. The name derives from “bayt al sha’ar”, which were the tents used by nomadic dwellers in Qatar. They would traditionally feature stripes, and the black horizontal markings on the stadium exterior mirror this. The sadu patterns inside reflect geometric shapes in traditional weavings. You’ll find this breathtaking stadium in Al Khor. Situated about 35 km north of Doha, the city made its name through pearl diving and fishing, occupations which lured desert inhabitants to the coast.

In many respects this stadium is the most interesting of all. Innovative, bold and colourful, the shipping containers used to create the structure are an obvious hint to Qatar’s long seafaring heritage. Even the name is clever. 974 is not only the number of containers used in construction but also Qatar’s international telephone dialling code. The cost-efficient venue is designed to be completely taken apart after the tournament, so you’ll need to be quick if you want to see it in use. Take in the view from Doha’s West Bay and then head over to the stadium itself to get a closer look.

These eight magnificent stadiums are all worthy of attention in their own way. Come for the football but hang around afterwards. Take the time to admire the architecture and surroundings of these places once the excitement of the match has dissipated. You’ll find that same wow factor in Doha’s waterfront skyline. Glittering glass and steel skyscrapers line the bay, while coastal landmarks such as the beautiful Museum of Islamic Art (reopening in autumn 2022) provide a compelling reason to head indoors. 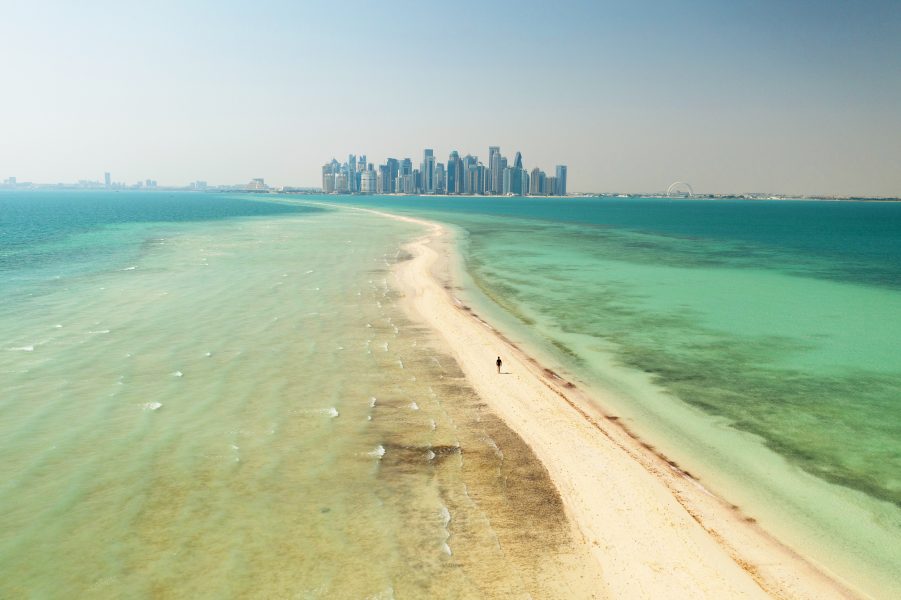 Mundana’s experts can help you put together a memorable trip to Qatar. No matter what you need – a hotel room with a fabulous view, ideas for Doha sightseeing, suggestions for thrilling desert pursuits like dune-bashing or Qatar World Cup tickets to one of those highly anticipated games – get in touch. We can help kick start the trip of a lifetime.

Finland and Russia: Cities of the frozen north

Finland and Russia: Cities of the frozen north