New York is so packed with museums, parks and visitor attractions you could visit for a month and barely scrape the surface. But sometimes, the very best thing to do in a city as frantic as the Big Apple is to do absolutely nothing. Littered across its five boroughs are places where the view is so lovely you’ll just want to sit for a while and savour it. Here’s where to take a load off – our picks for the best views in New York City.

The Top of the Rock 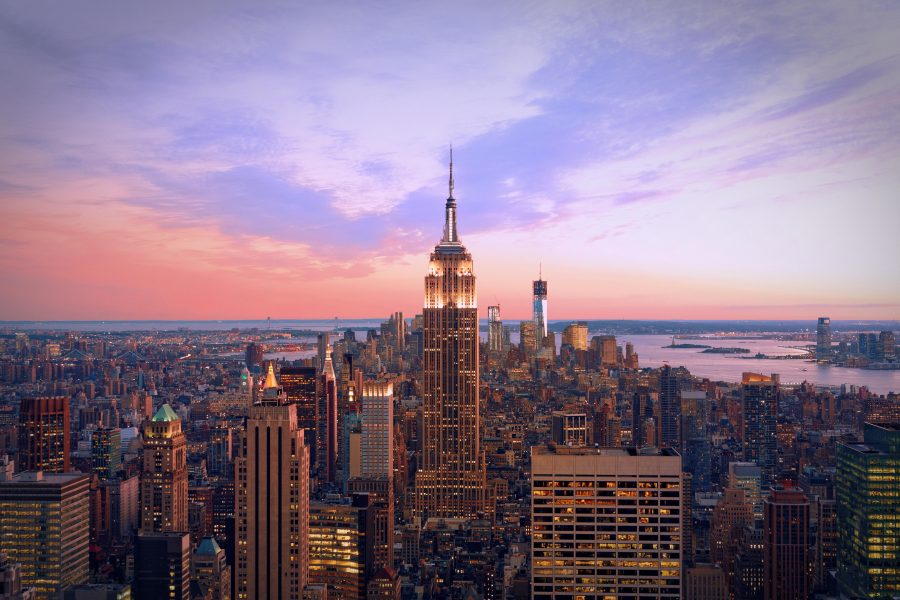 Atanas Bezov
You can’t say you’ve done New York until you’ve ridden the elevator to the top of one of its famous skyscrapers. There are several with public observation decks. You could easily do them all, but if time is short, which should you choose? Many people will argue for the Art Deco glamour of the Empire State Building. However, if that’s your pick, New York’s most iconic skyscraper won’t be in your view. Instead, ascend the Top of the Rock. It will not only give you a fabulous view of the Empire State Building, but also a close up view of the Chrysler Building too. 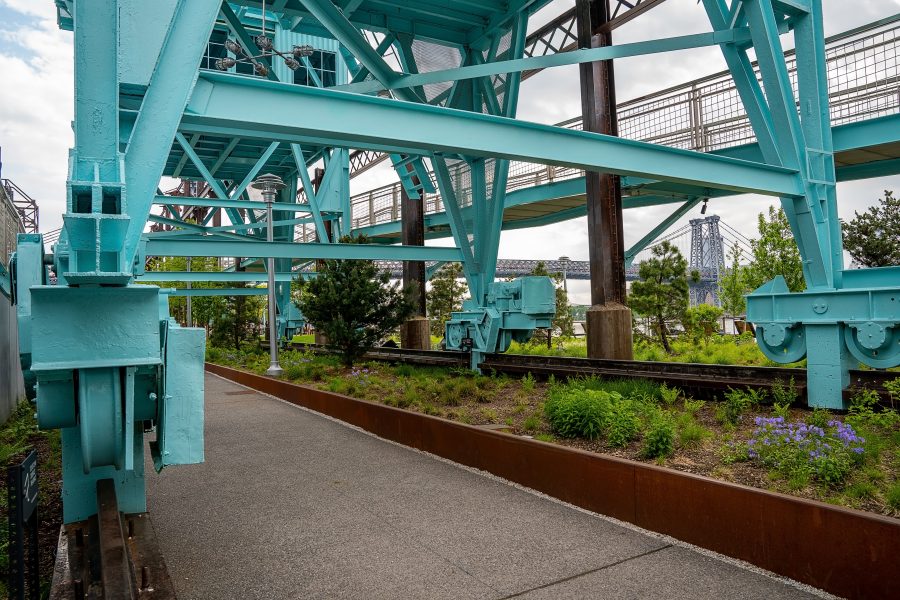 Ingus Kruklitis
Less well known is Domino Park. Located in Brooklyn’s Williamsburg district, this is a relative newcomer to the NYC park scene. This clever space marries structural planting to the industrial architecture of a redundant sugar refinery. But it’s biggest selling point is its waterfront location. Settle back into one of the recliners and watch the traffic pass up and down the East River. You’ll enjoy a super view of the Williamsburg Bridge and the skyline of Manhattan across the water. 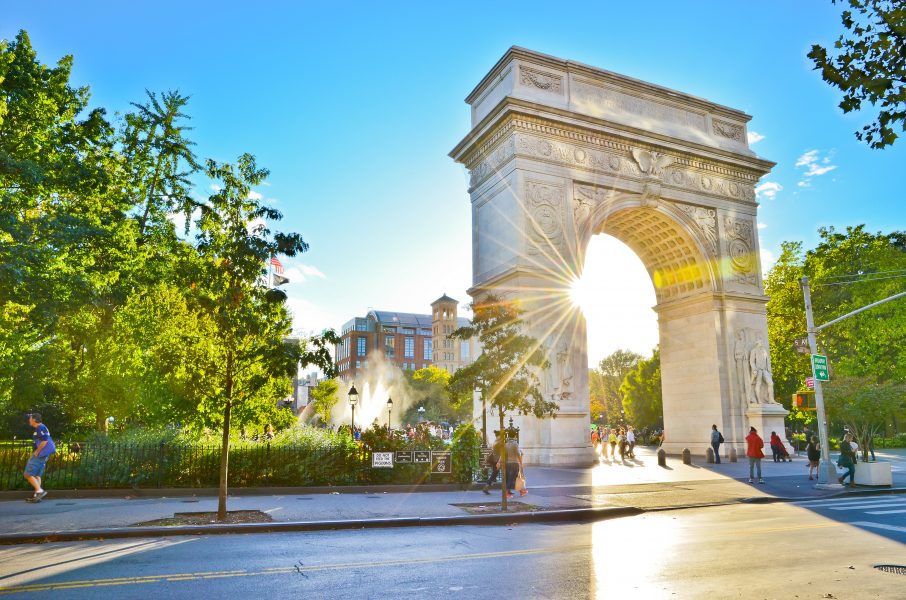 Javen
Align yourself correctly under the magnificent arch in Washington Square and you’ll get a great view extending north along 5th Avenue. In fact, until 1964, this thoroughfare ran right through the park. But residents campaigned for a recreational space, and so now you can enjoy petanque courts, a chess plaza, kids’ play space, a dog run and plenty of seating. The landmark arch was built in the early 1890s. It replaced a wooden arch that was erected not long before to commemorate the centennial of George Washington’s 1789 inauguration as President of the United States. 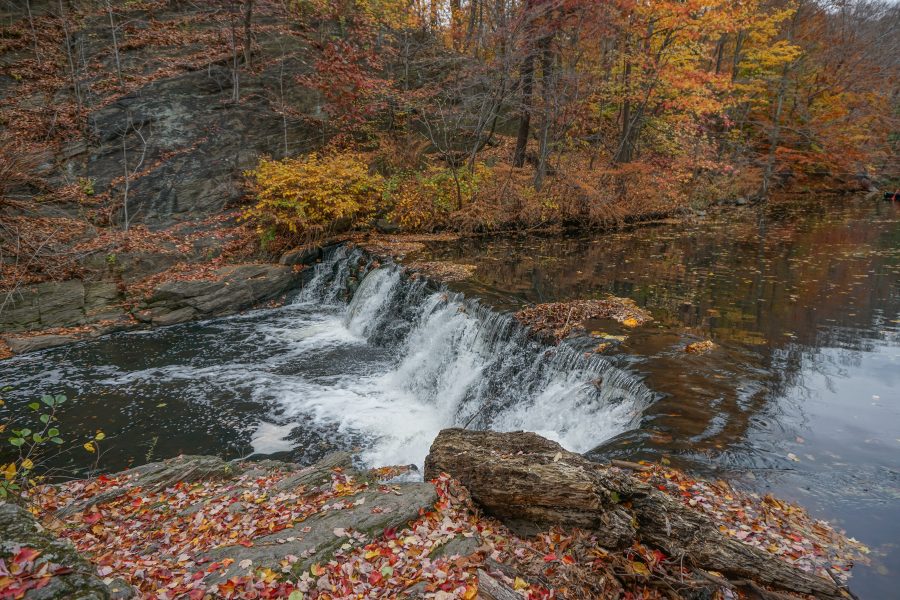 Linda Harms
The Bronx is often overlooked by visitors, save perhaps for an outing to watch a Yankees home game. The best view in this borough is not of the pitch, however, but can be found in the botanical garden. The 250 acre site boasts over a million plants and trees. They look especially dramatic in spring or autumn when pink blossom or gold leaves add a splash of colour. Team a visit with the nearby Bronx Zoo and make a day of it. 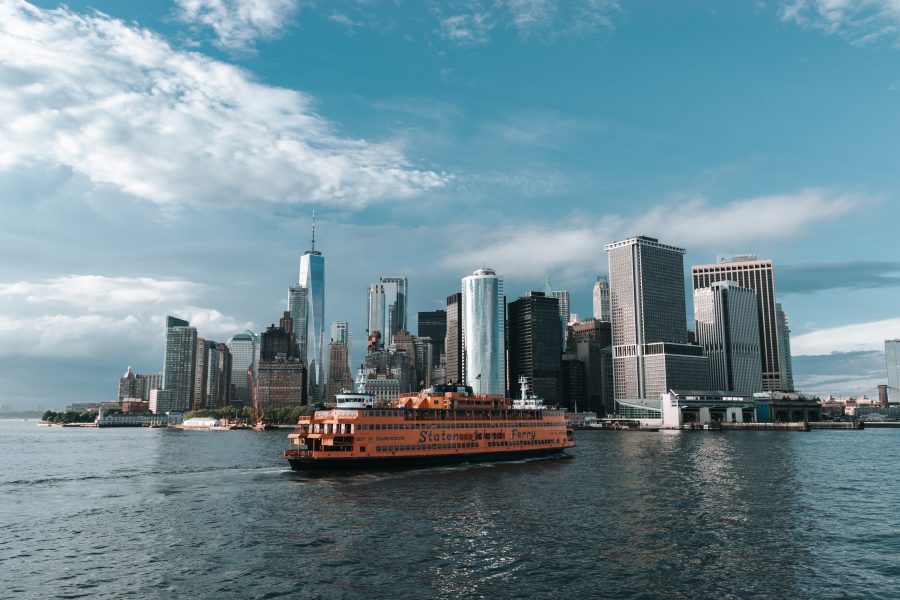 Herti Shaka
Another of New York City’s most unmissable views is that of Lower Manhattan, the Statue of Liberty and Ellis Island from the Staten Island Ferry. To enjoy it, you won’t have to pay a penny for the privilege. There’s a recently opened outlet mall close to the ferry terminal where you can grab a coffee and watch this unmistakable orange vessel as it shuttles back and forth between Battery Park and Staten Island. But for a view that doesn’t feel like New York City at all, jump on a bus and head for Historic Richmond Town. The oldest building at this fascinating open air museum dates from around 1695. 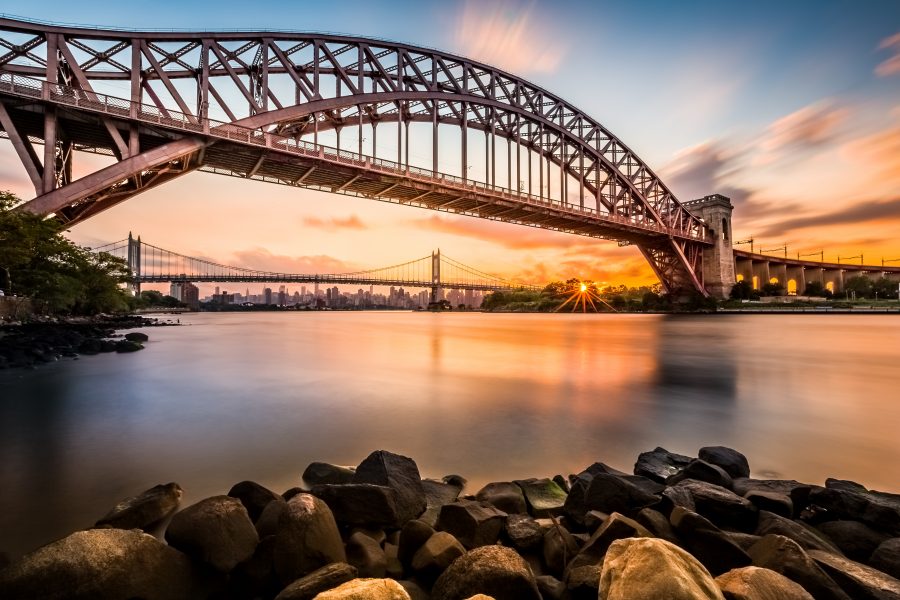 Mihai Andritoiu
The borough of Queens isn’t top of most people’s lists when it comes to views but you might wonder why if you make it to Astoria Park. This waterfront park is a hidden gem – most travellers have never heard of it, much less visited it. To see it for yourself, head for the eastern shore of the Hell Gate, a strait of the East River. Explore a little more of Astoria before you leave. The excellent Museum of the Moving Image is around half an hour away on foot. 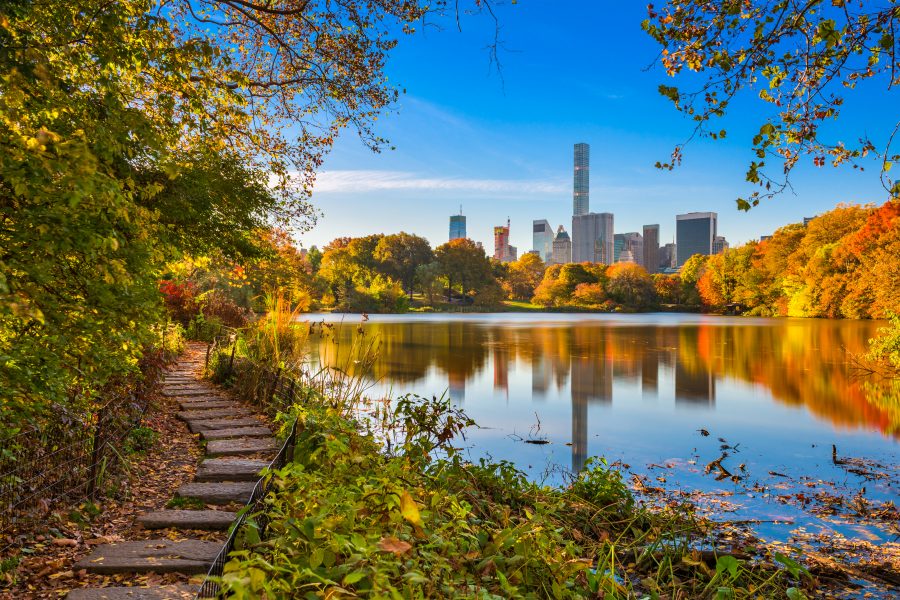 Sean Pavone
There are so many gorgeous views in Central Park that it’s hard to know where to begin. In winter, ice skaters enjoy a backdrop of the exclusive apartment buildings and high rise hotels that line the southern boundary of the park. But for a more tranquil outlook, follow the paths to water. The Lake, south of 79th Street, is where you’ll find the famous Loeb Boathouse. The much larger Jacqueline Kennedy Onassis Reservoir stretches ten blocks north from 86th Street. Meanwhile, pretty Harlem Meer extends to the north eastern corner of the park, close to the secluded Conservatory Garden. 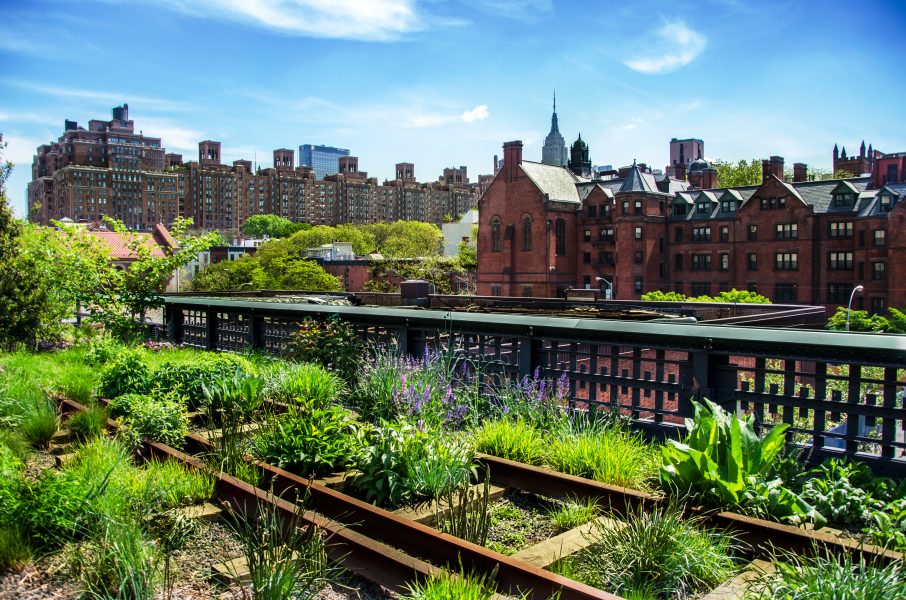 Albachiaraa
For an unusual view of the Meatpackers District and Chelsea, climb the steps up to the High Line. The masterminds behind this wonderful park created a thing of beauty out of a disused elevated railway. While your attention will be drawn to the original sleepers and ironwork, its many seating areas have been carefully placed to make the most of the lofty outlook. Don’t miss a glimpse of the old Nabisco biscuit factory. The newest part of the High Line connects it to Hudson Yards, from which you can enjoy a clear line of sight out over the Hudson River. 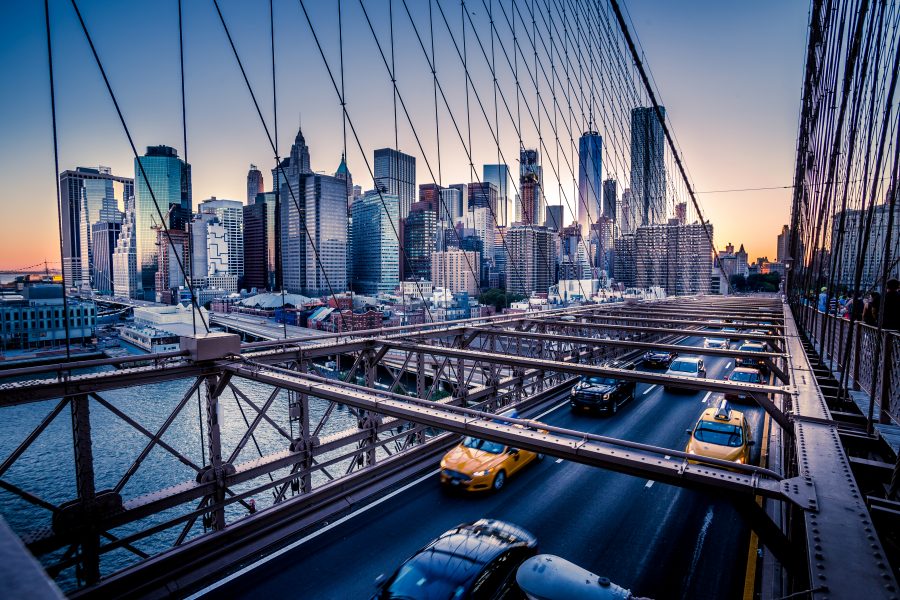 Mervas
The most famous bridge of all in New York City is Brooklyn Bridge. Whether you look at it or from it, the view is breathtaking. A pedestrian walkway makes it safe to cross on foot – look up to enjoy the impact of its structure against a sunset sky. From Manhattan, grab a spot on a bench in Jerry Driscoll Walk. Next, cross the East River to Brooklyn Bridge Park. Skirt under the bridge for a spin on Jane’s Carousel. When you’re ready to return, hop on a yellow water taxi and complete the loop.
To discuss a visit to New York and plan your hotel choice around the view you love best, give Mundana’s experts a call today.