Switzerland might be familiar to winter sports enthusiasts but it packs a punch in summer too. Let the train take the strain and transport you through the country’s breathtaking landscapes. Here are Mundana’s picks for the best Swiss railway journeys. 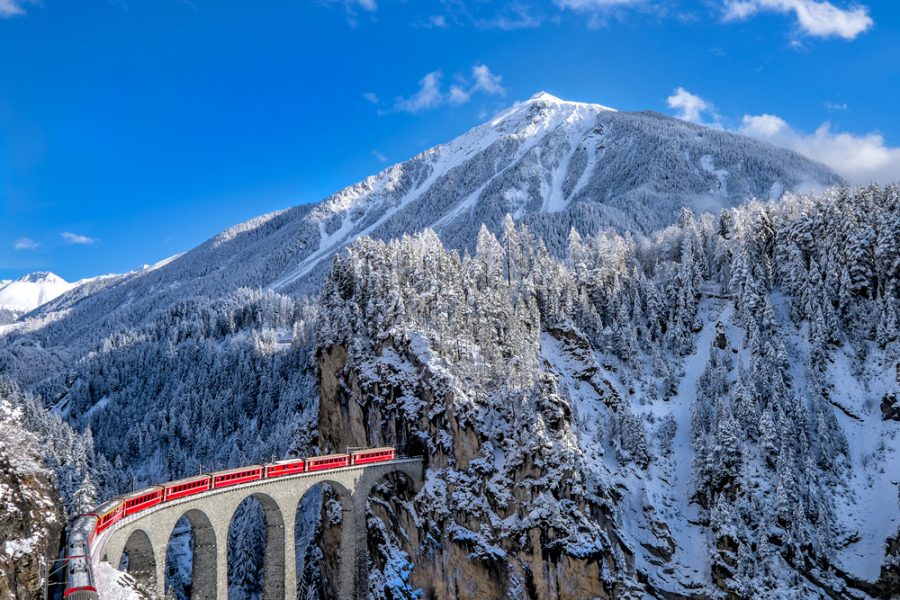 Hanging out of the window of a rear car of the Bernina Express to watch as the front of the train slips across the iconic Landwasser viaduct is one of Switzerland’s iconic rail journey moments. Together with the Albula Line, it forms part of a UNESCO World Heritage site. Ducking in and out of 55 tunnels and crossing an impressive 196 bridges and viaducts, this is an extraordinary feat of engineering. You do not have to be a train nerd to enjoy this one. Watch out for the Morteratsch and Palü glaciers. Alpine Lago Bianco and the darker Lej Nair lakes provide scenic glamour. Just when you thought it couldn’t get any better, the 360° spiral that encompasses the nine arches of the century-old Brusio Viaduct provides the show-stopper ending. 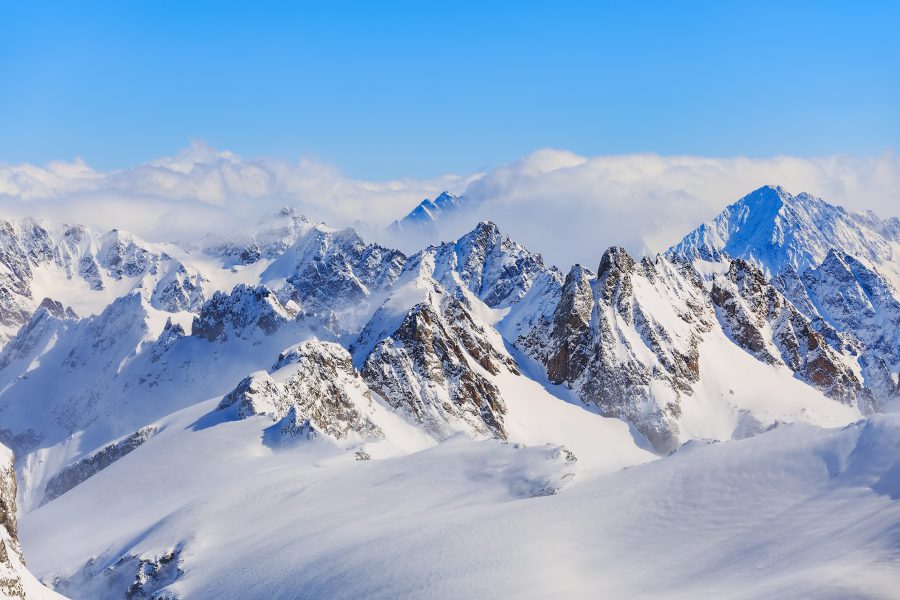 Don’t board this train with high expectations: it’s just a regular train doing its regular run from Lucerne to Engelberg. What makes it special is the destination. Towering above the pretty town of Engelberg is Mount Titlis. Three gondolas carry passengers up the mountain, past glittering lakes and flower-strewn Alpine meadows. But it’s the view from the top that will take your breath away. Even in the height of summer, its lofty summit boasts plenty of snow – enough to try snow tubing if you’re up for an adrenaline rush. 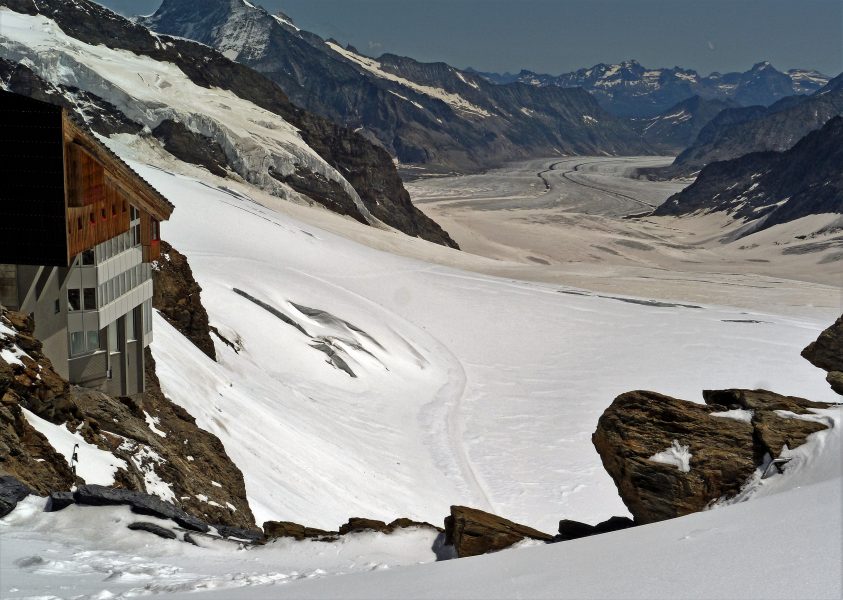 Prepare yourself: this is not a railway with a view but it is more than worthy of a place on a list of the best Swiss railway journeys. Like the Engelberg Express, the reward is the destination. This cogwheel railway, hauling passengers to the highest railway station in Europe, runs almost entirely inside the mountain in a tunnel that took sixteen years to complete.  Alight at the top for stunning views of the mighty Aletsch. As on Titlis, in summer the snow lies thick on the ground and temperatures rarely climb above zero. 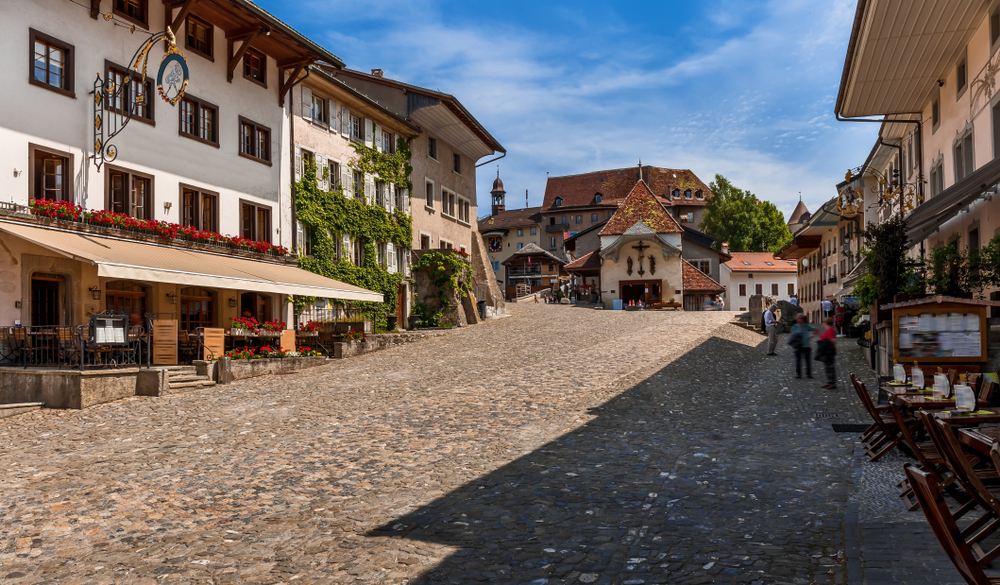 Strictly speaking, the operators of this railway should retitle it The Chocolate and Cheese Train. Hugging the shoreline of Lake Geneva it passes through grassy valleys to reach Gruyères. There, passengers alight for a tour of the cheese factory and enough time for a leisurely lunch in the town’s pretty main street. Leave room for something sweet as the train’s second stop is at Broc, home to the Cailler Factory. There’s not much they can’t teach you about cocoa and confectionery on this fascinating tour. It’ll take world-class willpower not to buy your bodyweight in chocolate to take back to Geneva. 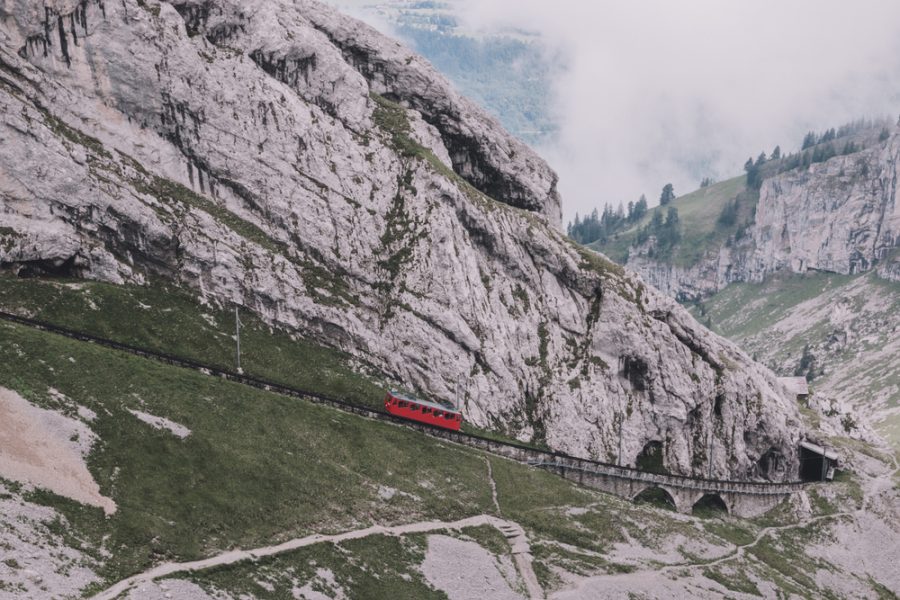 The Swiss never let something as insignificant as a mountain stand in the way of building a railway, but even they thought engineer Eduard Locher had lost the plot when he came up with this one. The cogwheel railway that ascends Pilatus Kulm is the world’s steepest and is now over a century old. The views as you climb are spectacular. Catch your ride in Alpnachstad, a short ride from Lucerne, for this, one of the best Swiss railway journeys. 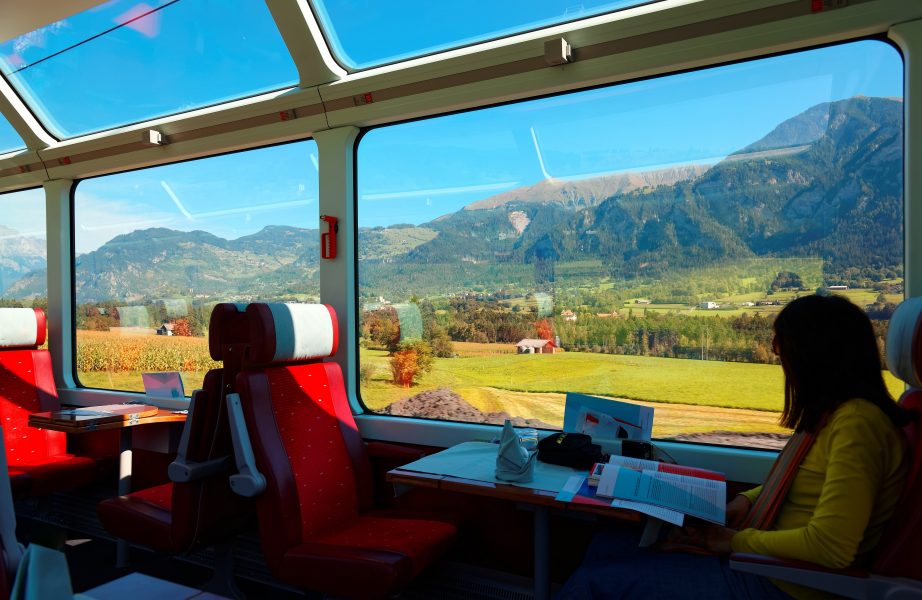 What’s jokingly referred to as the “world’s slowest express train” takes eight hours to roll from Zermatt to St Moritz. With landscapes this good, however, who in their right mind would want to rush? Ironically, the Rhône Glacier from which it takes its name isn’t visible from the train any more. It now passes through the Furka Tunnel rather than over the Furka Pass. But you will see the Aletsch Glacier, so impressive it’s listed by UNESCO. No matter: scan for marmots and mountain goats as the cogwheel helps the train drag itself up the Oberalppass, the highest point on the journey. Through your panoramic window, you’ll pass vineyards, weathered barns and herds of grazing dairy cows. Tick off some of the country’s most recognisable peaks as you trundle along: the Matterhorn, the Eiger and the Jungfrau all put in an appearance.

Tempted? Give Mundana a call and let us help you plan the railway adventure of a lifetime encompassing some of these exceptional Swiss railways.

Russia: In the Venice of the north

Russia: In the Venice of the north