Many of us enjoy visiting ancient ruins and archaeological sites while on holiday. Just as compelling are modern relics. Some of these ghost towns are a casualty of economic change; others were abandoned after catastrophic events. Littered across the world, they make an interesting day out for advocates of Dark Tourism – UNESCO even list some as World Heritage Sites. These are our picks for six fascinating ghost towns you must visit on your travels. 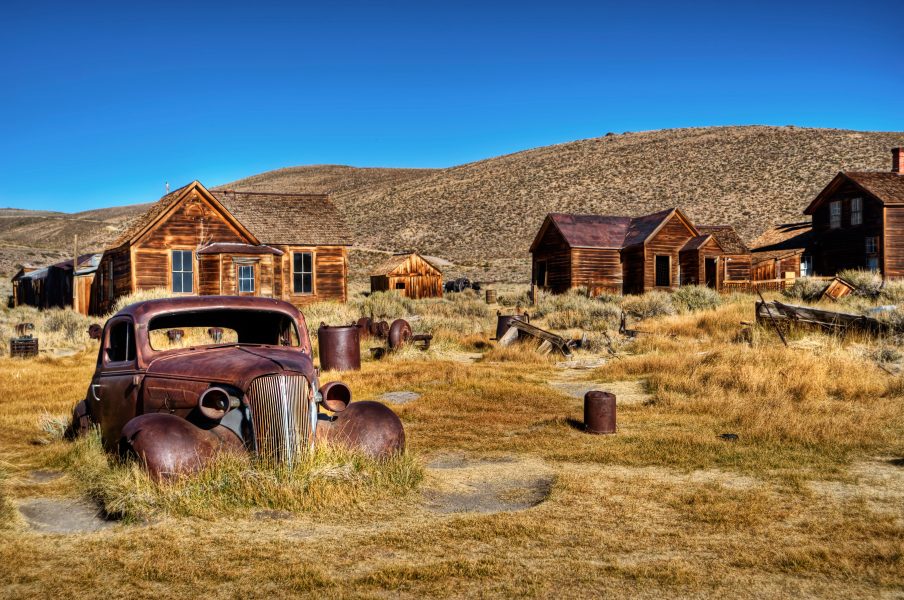 The last resident packed up and left Bodie, California, in 1942. Until then, it was a mining town. When gold was discovered in the nearby Mono Basin in 1859, people flocked to the area in the hope of making their fortune. Bodie grew dramatically after a much larger find of gold and silver at Gohe Bunker Hill Mine in 1876 and within three years the town had over 250 buildings and a population of 10000. It was pretty rough, with brothels, breweries and gambling dens resulting in a high crime rate. Even as early as 1886, the population had shrunk to about 1500. A couple of serious fires followed. But it was the suspension of mining by the War Production Board that was the final nail in Bodie’s coffin. Today’s visitors will find California’s best preserved ghost town with plenty of evidence of its past life. 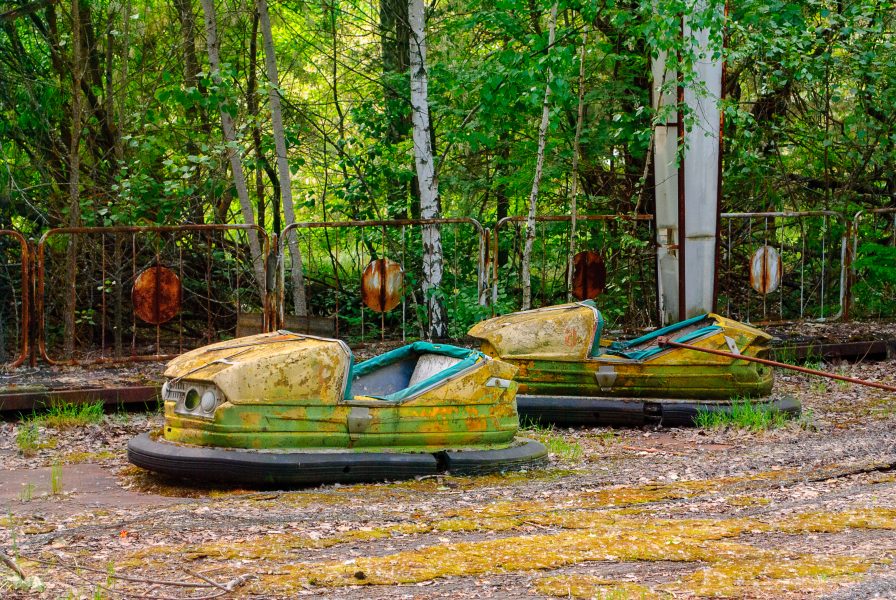 Pripyat is a much more recent ghost town. In 1986, an accident at the nuclear reactor at nearby Chernobyl made it unsafe for anyone to remain. Around 49000 people were evacuated in a hurry. They left behind pretty much everything they owned and there’s a poignancy to seeing abandoned children’s toys and other personal belongings. Today, it’s possible to visit the site with a reputable tour agency without compromising your own health. You can visit the funfair with its decaying big wheel and bumper cars, and where safe, buildings such as those which once housed the town’s schools. Communist propaganda posters peel from the walls and the clocks all show 11:55, the time when the electricity went off. However, nature is starting to take over again. The nearby forest hosts growing numbers of elk, moose, deer, boar, wolves and lynx. 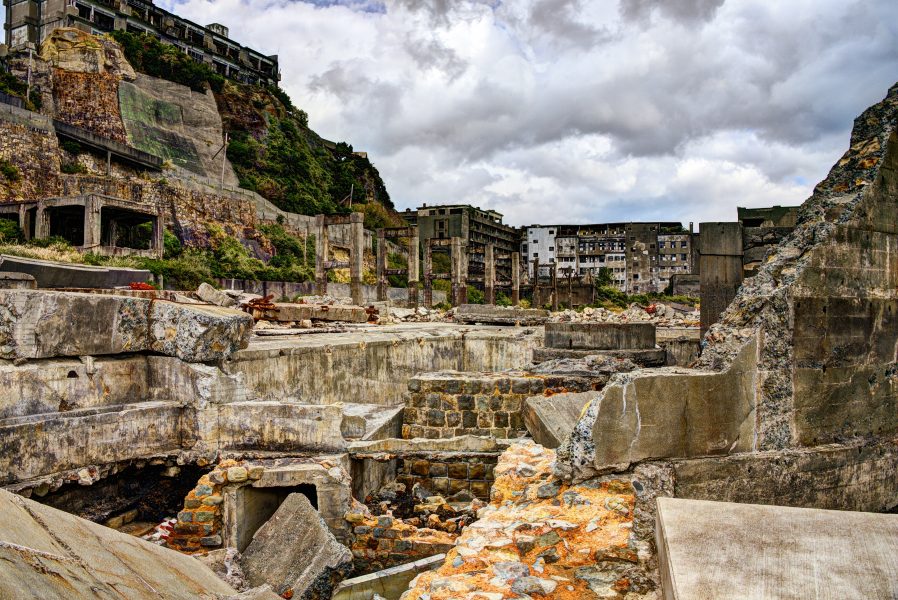 Until 1974, there was a coal mine on Gunkanjima, also known as Hashima Island. Around 5000 people squeezed into this tiny space, giving it one of the highest population densities in Japan. When the mine closed, life here wasn’t sustainable and its residents moved away. The buildings they left behind – workers’ quarters, shops, a school and of course the mine itself – have since been battered by the elements. Typhoons have left much of the place in ruins. A decrepit set of steps known as the “Stairway to Hell” lead to a forgotten Shinto shrine. If you do make it up there, the views over the East China Sea are extraordinary. And if the place feels a little familiar, that’s because Gunkanjima featured in the James Bond movie, Skyfall, as villain Silva’s lair. 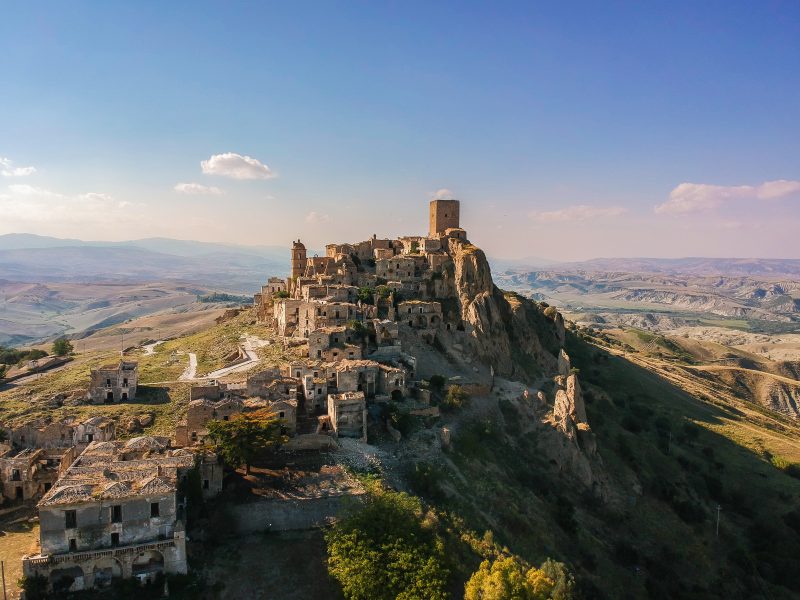 Across Italy, it’s not uncommon to find settlements perched on the top of hills – such lofty positions made them easy to defend. One such place is Craco. Its history can be traced back to the 8th century BC; fast forward to the 12th century AD and it had become an important military centre. A university was established in 1276; within a few centuries there were also four impressive palazzi. But in 1963, work on sewage and water infrastructure led to a series of devastating landslides. Nine years later, a serious flood compunded the town’s woes. By the time an earthquake shook the area in 1980, it was all over. No one’s been able to go back on a permanent basis but guided tours and occasional events are permitted. 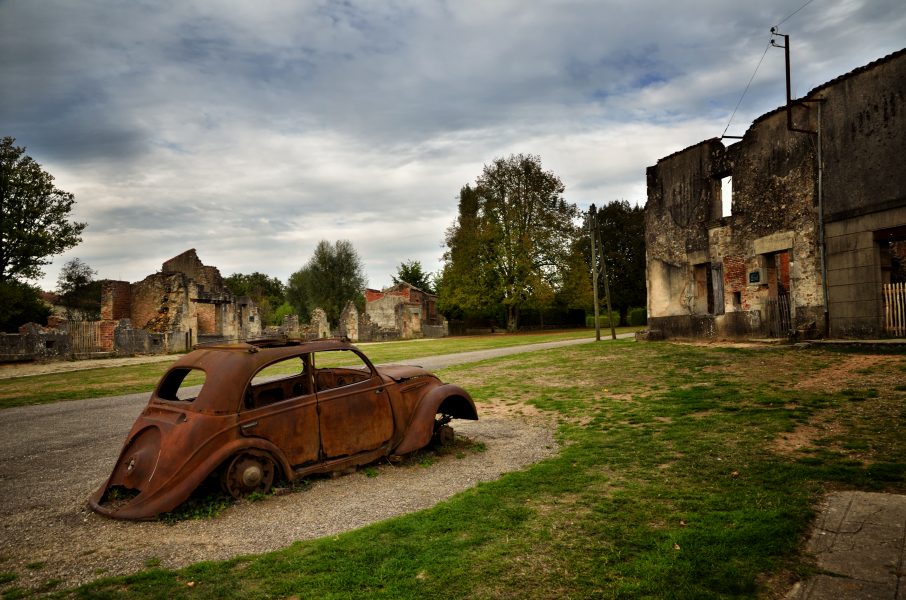 During World War Two, the people of Oradour Sur Glane were the victims of a horrific massacre. On 10th June 1944, in the space of just a few hours, 642 people were killed by Nazi Waffen-SS troops. Only six managed to escape with their lives.  Out of respect for the dead, the village was never rebuilt and the shells of what would have been shops and family homes stand empty. In 1946, the French President Charles de Gaulle declared that it would be preserved in its ruined state as a memorial to those who lost their lives and as a reminder of the horrors of war. Today’s visitors can pay their respects and learn more at the Centre de la Mémoire. 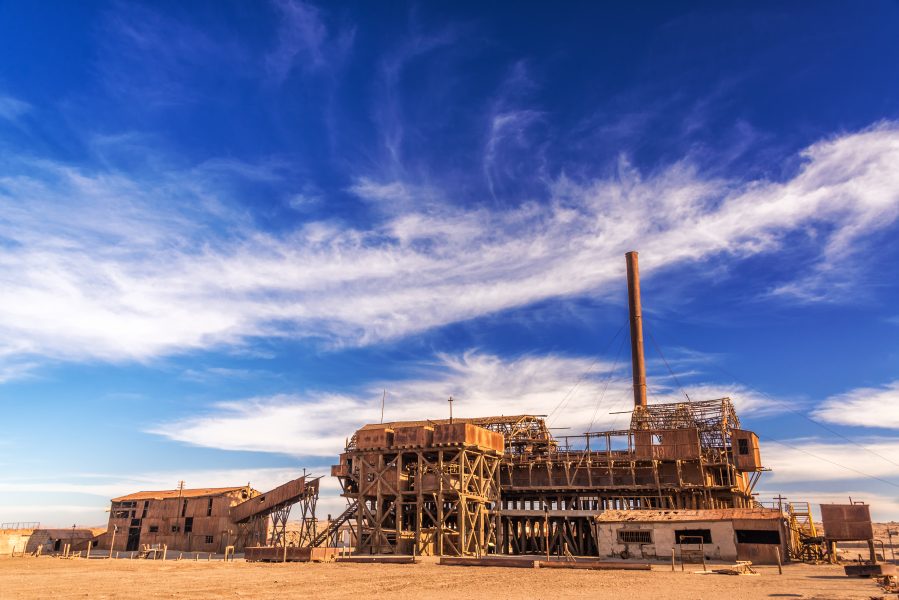 Close to the city of Iquique in the Atacama desert, you’ll find Santa Laura. There, back in 1872, the Guillermo Wendell Nitrate Extraction Company opened a saltpetre works. Saltpetre is the natural mineral source of the chemical potassium nitrate which is used in the production of fertiliser. It was once a valuable source of income in this part of South America but the industry was badly hit by the Great Depression of 1929 and commercial production of artificial fertilisers. Abandoned in 1960, it became a national monument a decade later. These days, Santa Laura is considered especially important as there you’ll find the only surviving leaching shed and saltpetre grinder in the world. Together with the nearby Humberstone plant, it forms a UNESCO World Heritage Site. Visitors can also see the remnants of a railway line that linked the two.

To incorporate one of these into your next trip, get in touch with Mundana and find out more.