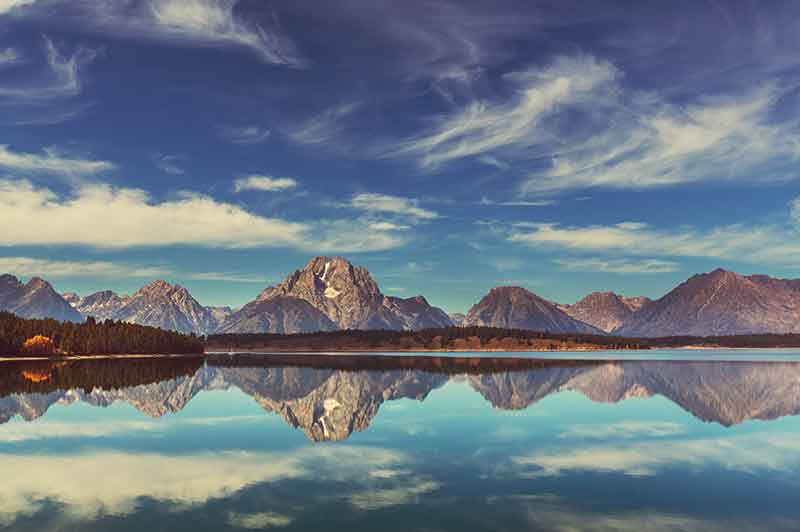 Nowhere has a better claim to being the home of the national park than the USA: Yellowstone was the first area in the world to be designated as such back in 1872, paving the way for a cascade of other areas of outstanding natural beauty to follow in its footsteps. From the wildest reaches of Alaska to the volcanoes of Hawaii, America’s national parks offer some of the most dramatic scenery on the planet. Here are seven of the best.

Many attractions these days are labelled as jaw-dropping, breathtaking or awesome but few actually deliver in a literal sense like the Grand Canyon does. This vast canyon stretches for 277 miles, cut by the mighty Colorado River which winds its way from the Rocky Mountains to Mexico. In places, the canyon spans a gap 18 miles wide and its steep sides are a mile deep. This is a place that overwhelms visitors, cutting off conversations in mid-sentence as they marvel at the colour and scale of such an incredible natural wonder. Views from the rim of the canyon are spectacular, but to truly appreciate its scale, take to the skies in a helicopter or trek down into the bottom of the canyon itself. 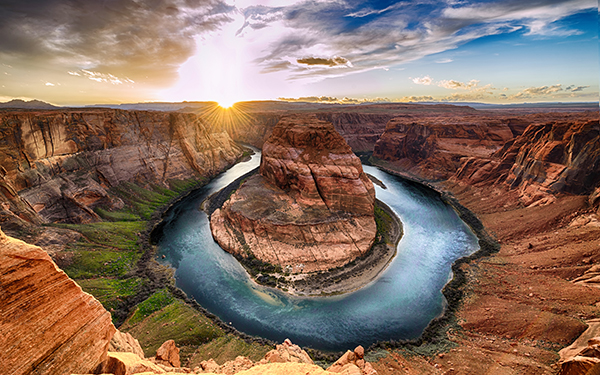 Tucked away in the far north east of the country in the state of Maine, Acadia is a gem of a national park. Compact and easy to explore in a day, its winding road loops the eastern corner of Mount Royal Island. Despite the crowds, it’s still possible to find a secluded pebble cove and clamber amongst the eroded granite to watch the breakers continue the work they’ve been doing since time began. Making frequent stops is a must: see the water force an explosion at Thunder Hole, eat warm popovers on the lawn at historic Jordan Pond House or drive to the top of Cadillac Mountain for far reaching views across the surrounding coastline. 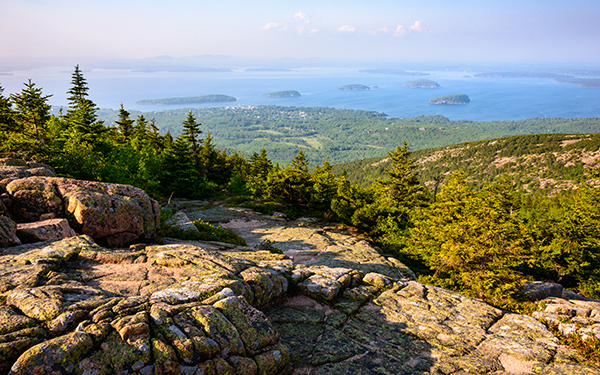 Utah is blessed with five wonderful national parks, the most famous of which is Arches. Red sandstone has been sculpted by the wind into delicate arches which perfectly frame the many unforgettable panoramas that litter the park. Allow as much time as you can for the impossibly picturesque Windows Section. Attractions there include the Garden of Eden and Parade of Elephants, as well as North and South Window; nearby you’ll find the most famous of all, Delicate Arch. If you only make time for at least one hike then it has to be the walk to Landscape Arch – at over 90 metres, it has the longest span of any natural arch in North America. Get up early and linger late: this park is at its best when the rock’s colour is warmed by the rising or setting sun. 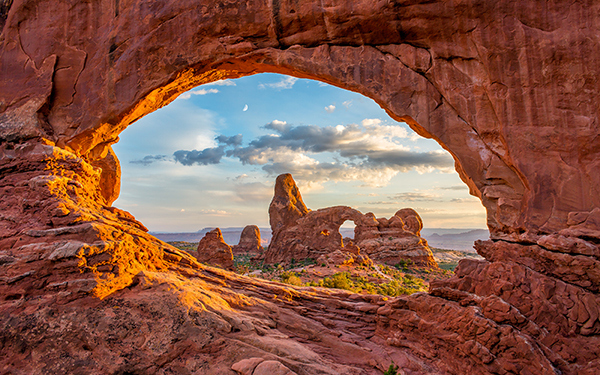 As the National Park Service celebrates a hundred years of conserving America’s great wilderness areas, Yosemite remains its poster girl. Popularised by the intensely dramatic black and white images by Ansel Adams, artists and photographers alike have flocked to the Yosemite Valley for decades to try their own hand at recording its beauty. Once you’ve ticked off the must-see sights such as El Capitan and Half Dome, spend some time hiking through flower-strewn meadows to the park’s many waterfalls. But a word of caution: take the warnings about bears seriously and don’t leave any food lying around – you’re a guest in ursine country and you’d better not forget it. 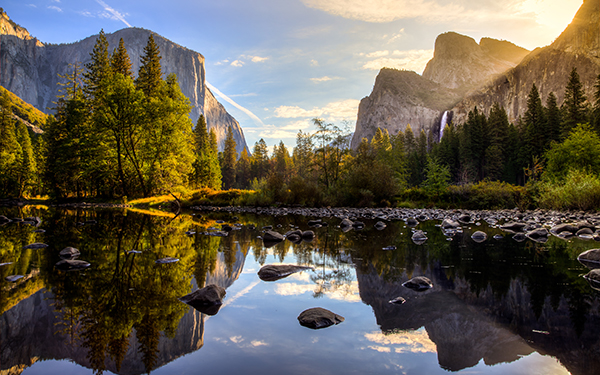 Montana’s home to Glacier, the US half of Waterton-Glacier International Peace Park. Threatened by global warming, there are just 25 glaciers in the park today compared to 150 back in the 19th century and some sources claim those remaining could be gone in as little as two more decades. Although many visitors stay in the park only as long as it takes them to drive the Going-to-the-Sun Road, it’s well worth hanging around to savour the scenery. Hike the Avalanche Lake trail through ancient cedar forest, visit Many Glacier to stroll to the nearby Fishercap Lake in the early evening to look for moose grazing or explore the Grinnell Glacier. Swiftcurrent Lake and Lake Josephine can also be explored by means of two historic wooden boats, Chief Two Guns and Morning Eagle, which together form a popular tour. 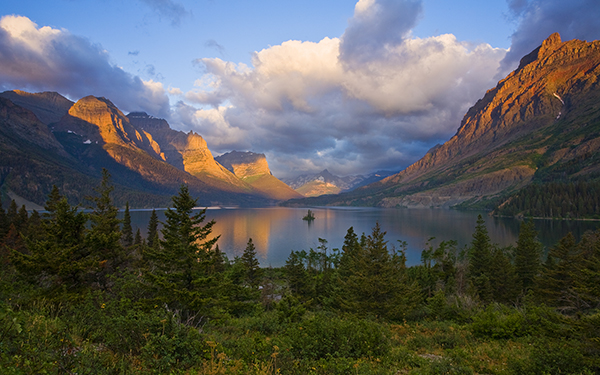 Sultry Everglades National Park can be found in southerly Florida. This preserved tropical wetland was initially created to protect the area’s fragile ecosystem and receives over a million visitors every year. They come to see the largest mangrove forest in the western hemisphere, home to species such the American crocodile, Florida panther and West Indian manatee, as well as around 350 different types of birds. But it’s not all water: there are several excellent walking trails in the Everglades too, one of the most popular being the Anhinga Trail which affords superb views of the sawgrass marsh nicknamed the “River of Grass” by writer Marjory Stoneman Douglas. While much of the Everglades is designated as a protected wilderness zone, there is a small section to the north where you can take a thrilling airboat ride through those swamps. 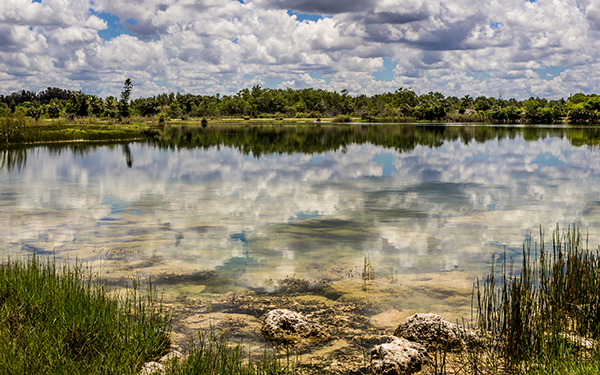 No guide could be complete without paying homage to the great Yellowstone National Park. A vast park spanning the three states of Idaho, Montana and Wyoming, this geothermal hotspot is where you’ll find magnificent Old Faithful, a geyser which shoots boiling water and steam high into the air at regular intervals. The kaleidoscopic Grand Prismatic Spring, five miles to the north, will delight with its deep blue waters fringed with rings of colourful algae. The park also offers plenty of excellent opportunities for wildlife viewing, from the herds of bison that roam the Lamar Valley to the impossibly cute but terrifyingly dangerous grizzlies that wander onto the park’s roads. 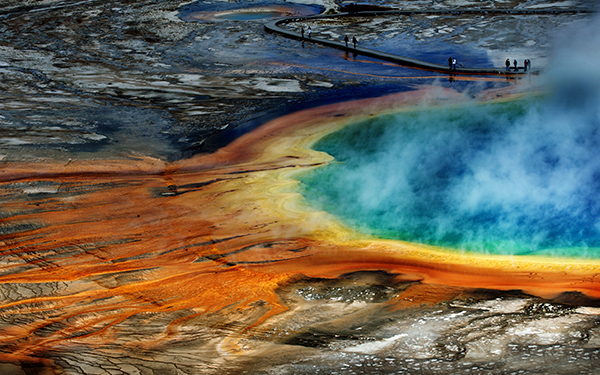 From flights to hotels, car hire to visa arrangements, let Mundana help with your American National Park vacation and ensure everything goes smoothly.