5 Lakes in Switzerland You Really Must See

Landlocked Switzerland sits at the heart of Europe. Boasting a diverse landscape, it reputedly has over 1,500 lakes – although we haven’t counted them all personally. Lakes Geneva, Constance and Maggiore are the largest, though the latter is more commonly associated with Italy. However, there are many smaller treasures that the Swiss may wish to keep to themselves. 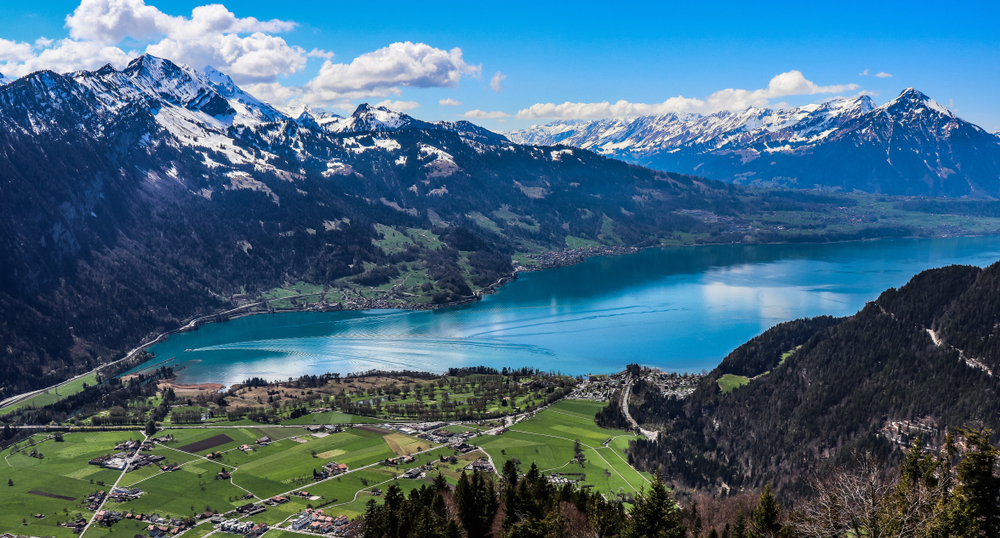 We begin our virtual tour at Interlaken, a popular resort in the Bernese highlands. Thun is an Alpine lake that remained after the last glacial period ended. An imposing backdrop of mountains and deep blue waters make it a perfect spot for an excursion from either Thun or Interlaken. Take a cruise or explore Oberhofen Castle with the lake lapping at its feet. Construction of the turreted building began around 800 years ago but there are many romantic additions to discover. 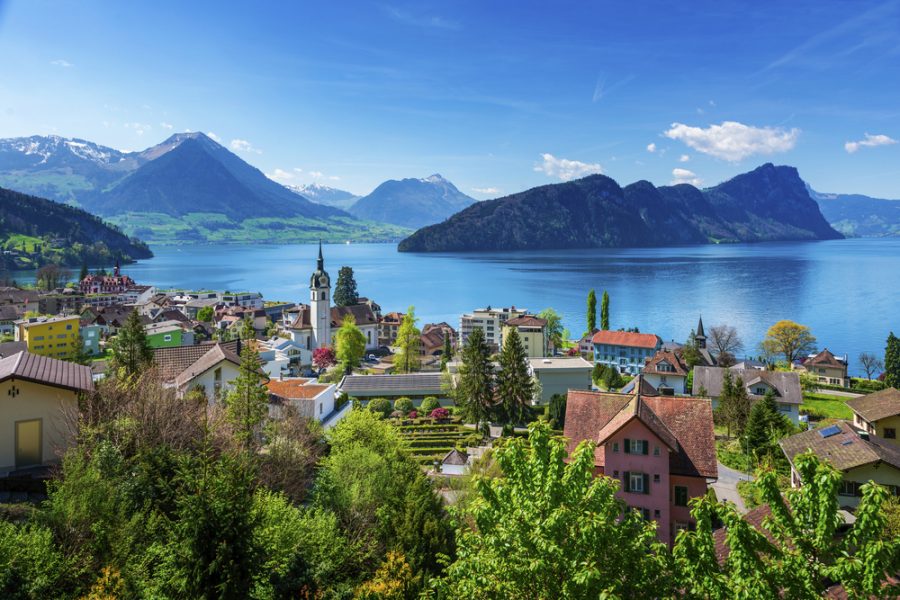 Nearby Lake Brienz is another tempting detour from Interlaken. Several passenger ships connect Interlaken, Brienz and the funicular railway to Giessbach Falls which is a wonderful place to picnic. Brienz is an achingly lovely place, and small enough to wander through and take in the atmosphere. Award-winning Brunngasse is packed with rustic wooden chalets which are festooned with red geraniums throughout the summer. Some call it the village of carving for its centuries-old tradition of woodworking and they still make violins there. 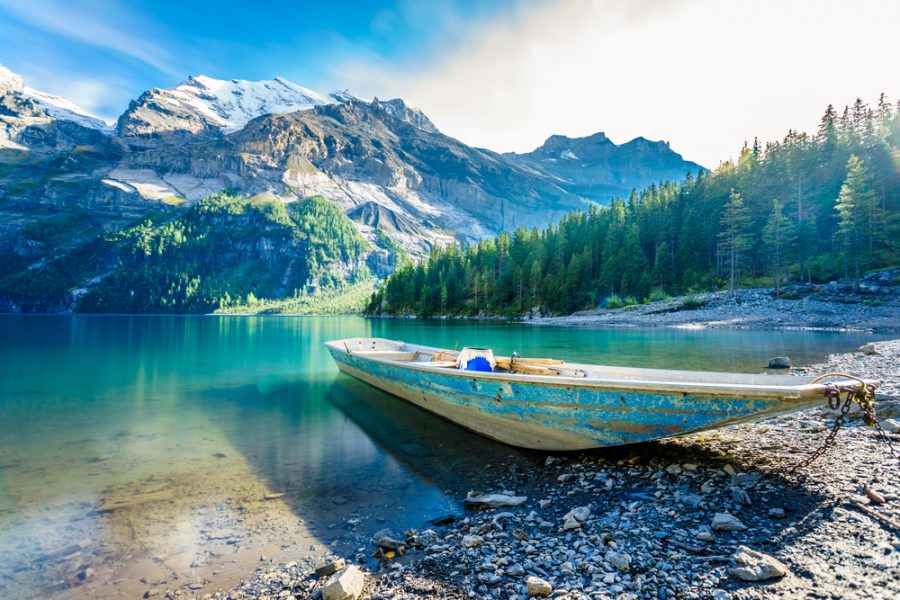 Oeschinen Lake is one of Switzerland’s highest at 1578 metres above sea level. A series of underground mountain creeks and drains keeps it topped up. Nostalgia fans will love the fact that it’s reached from Kandersteg by an old-fashioned chair lift which takes 7 minutes to climb 500 metres over rocky alpine meadows. Otherwise it’s a one and a half hour steep hike with glorious views all around. The water authority uses the lake as a reservoir and there’s a hydroelectricity plant at one end, but that doesn’t detract from its incredible natural beauty. In the spring the sun picks out the waterfalls created by glacial meltwater from the Blüemlisalp mountain chain. In summer, the best way down is via the all-weather toboggan run. 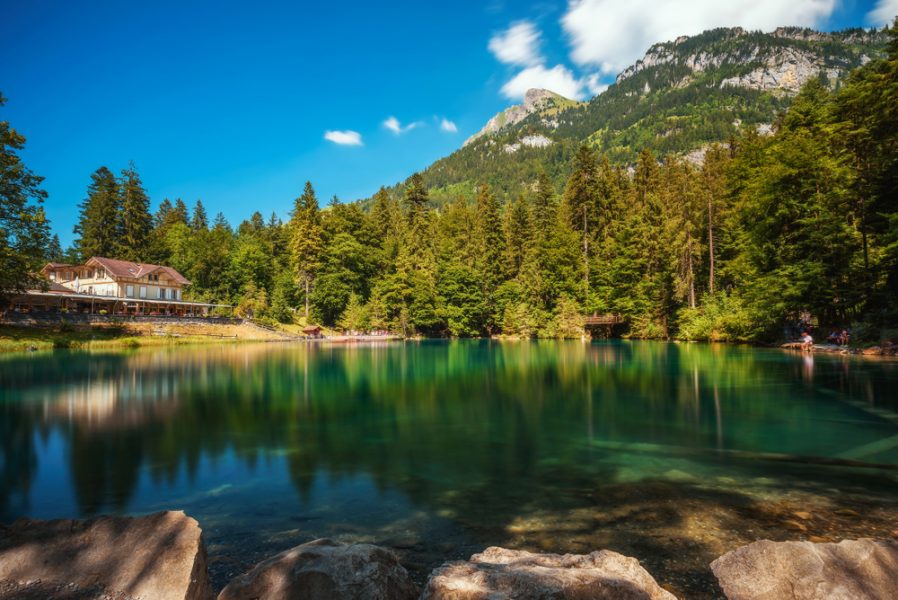 There is beauty in small things too. Some say Blausee Lake tucked away in the Kander Valley above Kandergrund is the loveliest of all. It’s a romantic place that you approach through a forest down a paved path. The striking blue water gave rise to a fairy story. So the story goes, a local maid fell in love with a shepherd, who would row her out into the middle of the lake under the stars. But tragically, one day, the shepherd fell from a cliff and died. Inconsolable, the maid went down to the lake night after night to row herself out onto the water. One morning, her parents found she was missing; the maid had drowned and the boat had sunk to the bottom of the lake. But it was also that morning that they noticed the water had taken on the intense colour that perfectly matched the maid’s eyes. 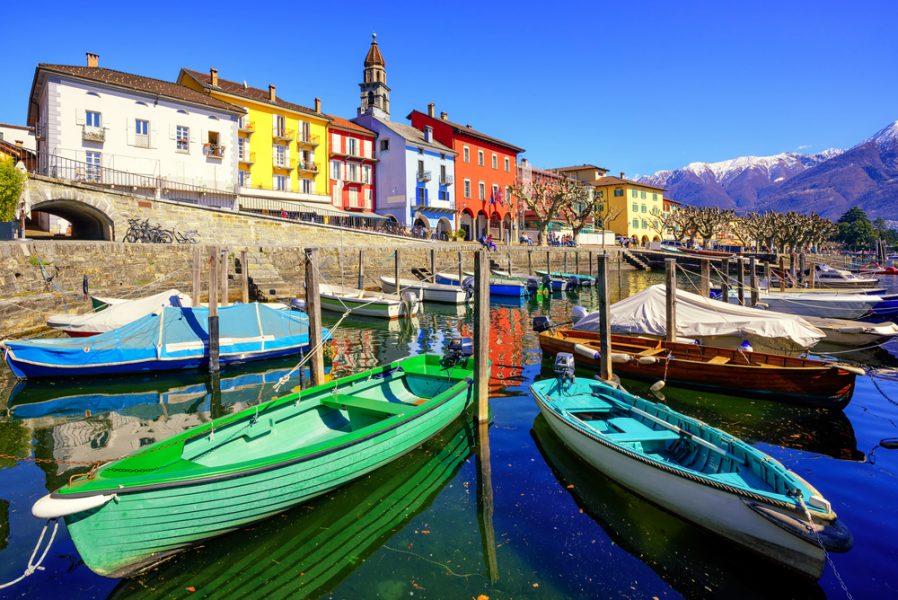 Lake Maggiore is one of the deepest lakes in Switzerland with a maximum depth of 1,220 feet or almost a quarter of a mile. It has two groups of islands: the Brissago Islands which fall under Swiss jurisdiction and the Borromean Islands which are Italian. The climate is mild all year round making a stroll along the promenade in Ascona feel positively Mediterranean. While away a pleasant afternoon at Parco Botanico del Canton Ticino on San Pancrazio, also known as Grande Isola, which has a collection of over 1,500 plants from all over the world.