Which of the Greek Islands is best for you? - Mundana
Mundana

Which of the Greek Islands is best for you?

Whittling down which of the Greek Islands is best for you is no easy task. For a start, there are more than 6000 islands and islets, of which 227 are inhabited. That’s still an awful lot of islands, so how do you go about thinning out your list of maybes until you’ve settled on a destination? Here’s how to figure it out.

If there’s one image that sums up the Greek Islands, it’s that of Santorini at sunset. Thousands of tourists flock to Oia to watch the setting sun puddle into the water of its famous volcanic caldera. Though you’ll be hard pushed to find solitude, a scene as remarkable as this is undoubtedly worth sharing. 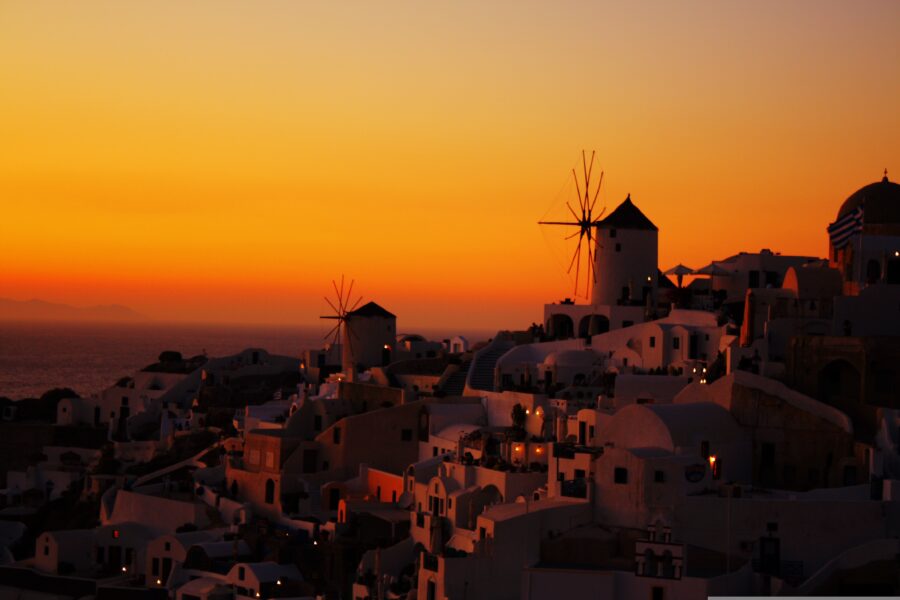 This Cyclades head turner has become synonymous with luxury travel, its whitewashed hillside homes repurposed as upscale boutique hotels and villas. The charming capital, Fira, is a maze of alleyways littered with shops, bars and tavernas. Call in to Megaro Gizi; this 17th century building houses a museum about what life would have been like on the island in the past.

Best for the great outdoors: the Ionian Islands

Lush and green, the seven Ionian Islands make an idyllic setting for those who love to be outside. Myriad hiking trails lead into the countryside. Easily reached from Corfu, little Paxos is strewn with olive trees; walk to its three delightful bays and bathe in the limpid water. Meanwhile, seekers of laidback getaways could do worse than Lefkada or sleepy Ithaka. 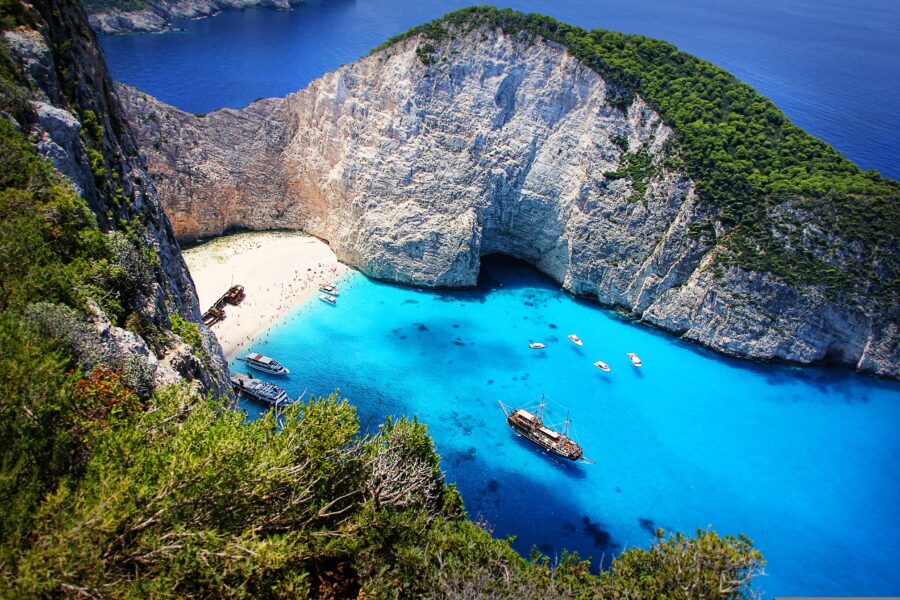 Over on Kefalonia, semi-wild horses run free on the slopes of Mount Ainos in its unspoilt interior. If you’re lucky, you might catch them having a drink at the freshwater spring up at Zoodohos Pigi Monastery. Alternatively, travel to the island of Zakynthos to swim through the Blue Caves, reached only from the water, or visit Shipwreck Beach.

The gorgeous island of Skopelos in the Sporades was once low-key. Until, that is, Hollywood came to town. Perched on a craggy rock outcrop overlooking the sea is the tiny church of Agios Iannis, the setting for Sophie’s wedding in Mamma Mia. You too could marry in Greece; we can help plan your destination wedding. To reach it, you’ll need to climb 198 steps, but it’s definitely worth the effort for such an extraordinary view. 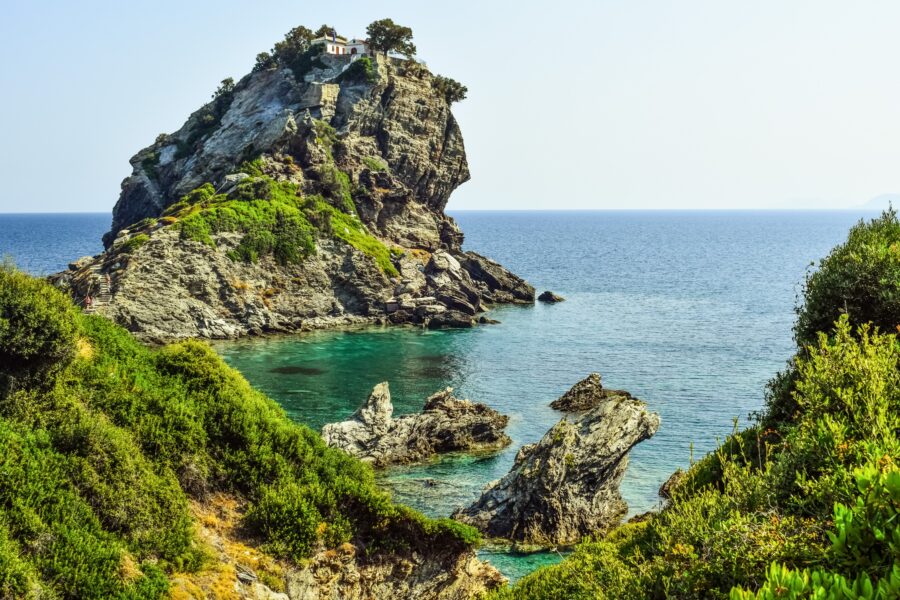 The island’s also home to around 360 other churches and monasteries, though some are off-limits to the public. One of them, Agios Riginos, overlooks Skopelos Town. This former monastery commemorates the island’s patron saint and has a shop selling locally-made honey, wine and olive oil.

Not for nothing is Mykonos described as the Ibiza of Greece. This is party-central, a place to drink and dance until dawn. After dark, its beaches become dance floors as the world’s top DJs play their sets. Drink cocktails with a sophisticated crowd in clubs like Astra or watch the drag queens strut their stuff at Jackie O’s. 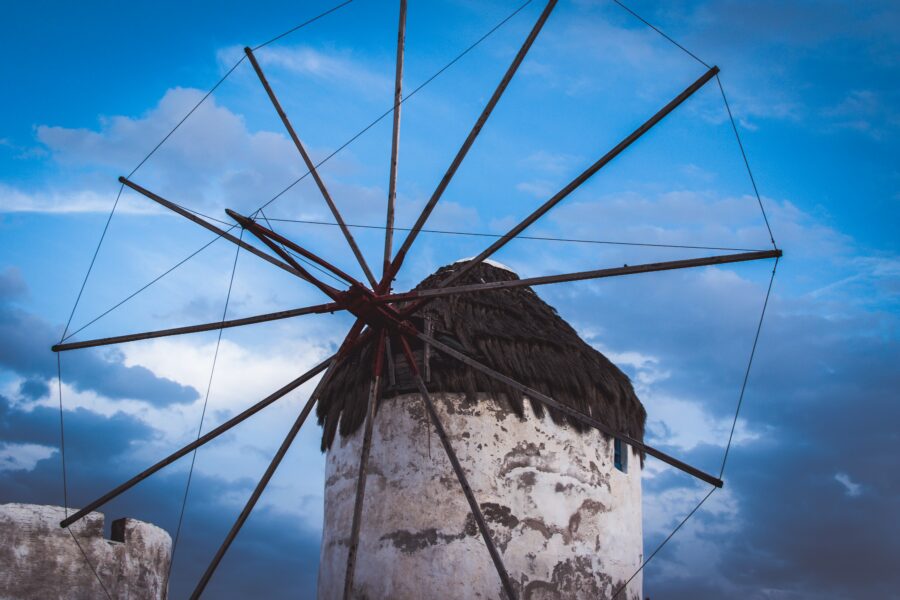 This Cyclades favourite draws huge crowds throughout the summer season, but there’s more to the place than simply its nightlife. Take a look at its famous windmills, once essential for grinding grain or check out the colourful houses of Little Venice, whose balconies overhang the sea.

If you’re looking for an add-on to an Athens city break, then consider hopping on a ferry to one of the closest islands to the Greek capital. The Saronic islands comprise Aegina, Hydra, Poros, Agistri and Spetses. The fast ferry from the port of Piraeus to Aegina, for example, takes as little as 40 minutes, making this a viable day trip option. Aegina has a pretty port but its most famous historical site is the ancient Temple of Athena Aphaia. 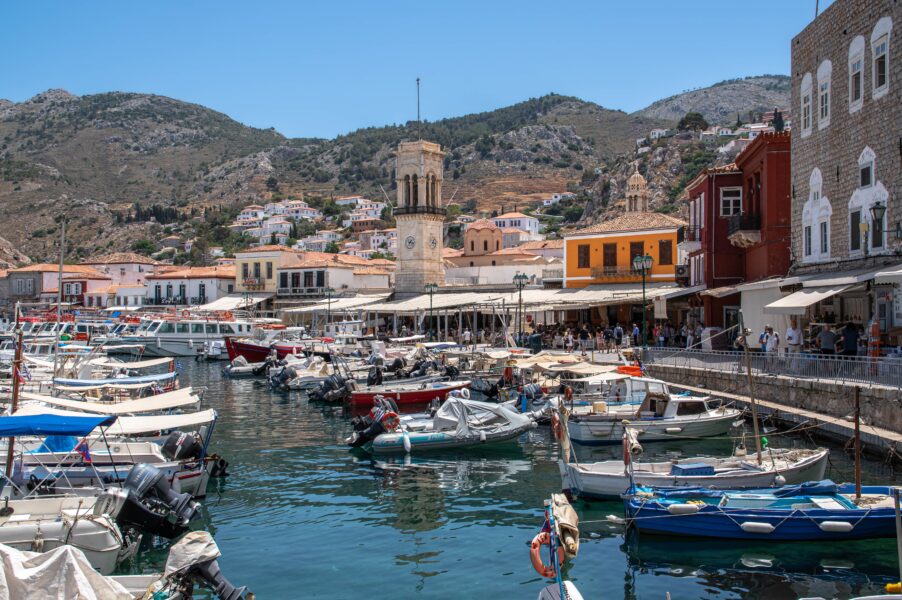 From Aegina, you can continue on to Poros. This verdant island is shrouded in pine trees and also boasts a lively port overlooked by a landmark clock tower. Venture out to see the Monastery of Zoodochos Pighi and the ruins of the Temple of Poseidon. Alternatively, if you’d like to hike or swim in car-free Hydra, then the quickest connection from Piraeus takes just under two hours.

Best for history: Crete or Ios

Crete, the largest of the Greek islands, was home to the Minoans. Their civilisation flourished from about 3000 BC to about 1100 BC and four of their ancient Minoan palaces have survived: Knossos, Malia, Kato and Phaistos. Other historic sites on the island include Koules Fortress, which guards the entrance to Heraklion harbour, and the Venetian Fortezza that has stood in Rethymno since the late 16th century. 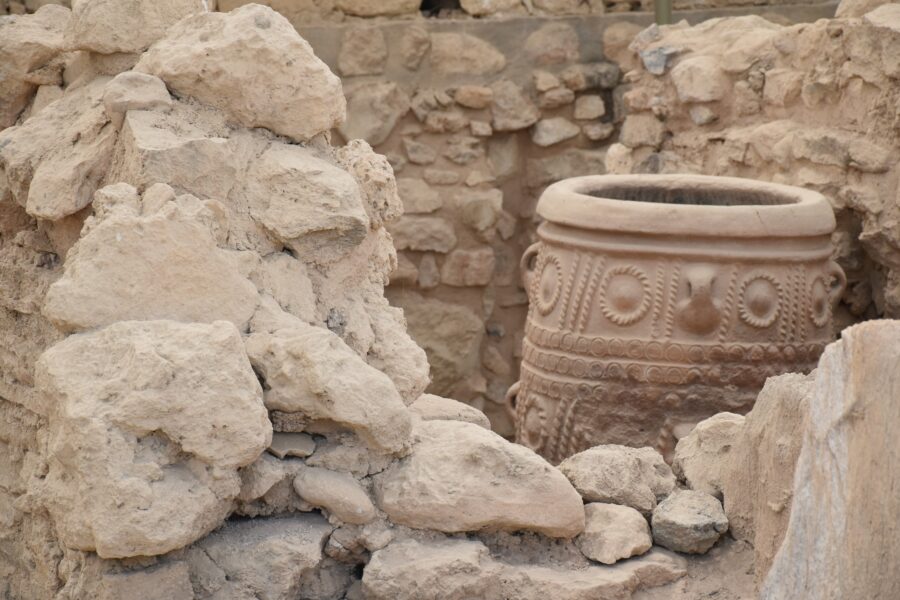 Further north, history buffs will also enjoy a visit to Ios, part of the Cyclades group. There, you’ll find the tomb of Homer. He was the poet who wrote the epic Odyssey. Close to the main town of Chora you’ll also find a well-preserved Bronze Age archaeological site called Skarkos. Not far way, a dozen restored but redundant mills overlook the Aegean Sea.

Victoria Hislop’s bestselling novel The Island is set on Spinalonga and the nearby Cretan village of Plaka. In the first half of the 20th century, the island was home to Greece’s leper colony. There was a huge stigma associated with this infectious disease and sufferers were sent there to live in isolation. 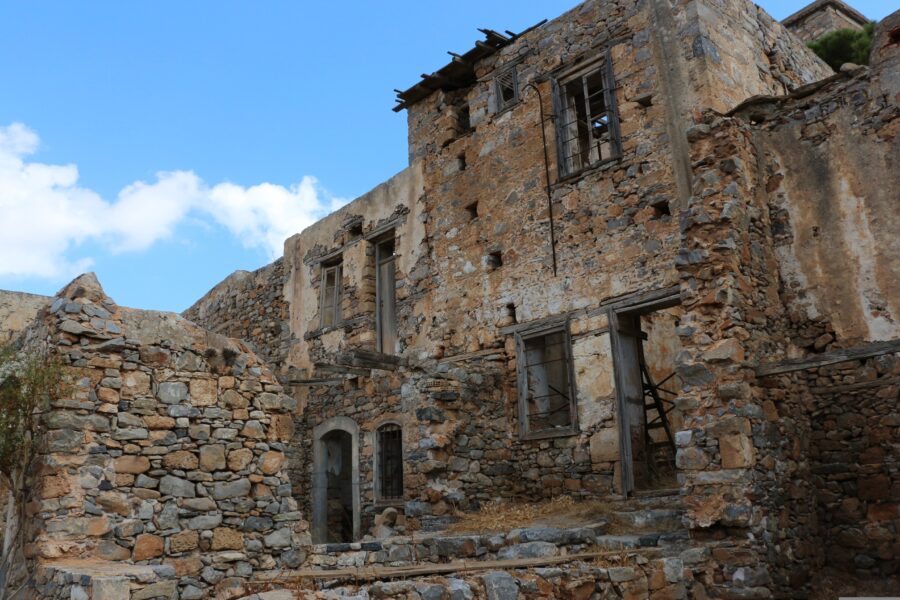 Feared and ostracised in equal measure, its residents initially lived in horrific conditions, but eventually created a thriving community. With improvements in medicine, a cure was found and the last resident left Spinalonga in 1957. Today, it’s a popular day tripper destination from Elounda on Crete, not only for what’s left of the leper colony but also for its ruined fortress.

Let’s conclude our roundup with beautiful Rhodes, one of the most popular Greek islands with visitors. Easily reached by direct flights, it’s a popular fly and flop destination with package holidaymakers. Many activities centre on the water, such as SUP yoga, parasailing, kitesurfing, wakeboarding, snorkelling and diving. Inland, swim at Seven Springs, reached via a dark tunnel. 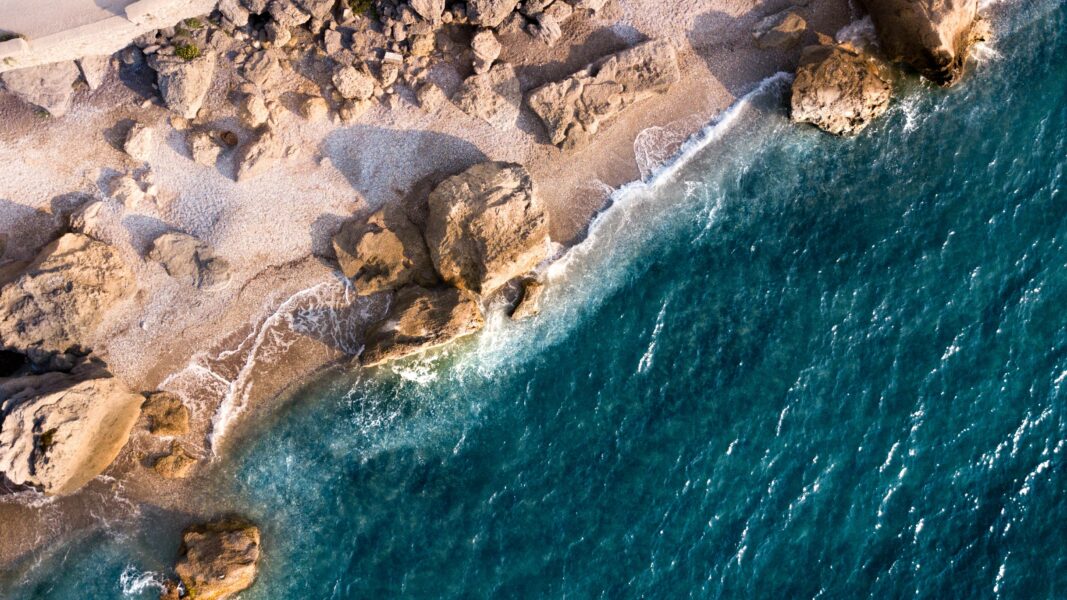 If history’s your bag, wander the narrow streets of Rhodes Old Town, a UNESCO World Heritage Site. Though the Colossus of Rhodes, one of the wonders of the ancient world, no longer stands at the entrance to the harbour, you can tour landmarks such as the Palace of the Grand Master of the Knights of Rhodes.

Wherever you plan to travel in Greece, why not let Mundana take care of your trip plans?

Which of the Greek Islands is best for you?