What to expect from a visit to Bhutan - Mundana
Mundana

What to expect from a visit to Bhutan

The mountain kingdom of Bhutan is one of Asia’s most enigmatic and mysterious destinations. This extraordinary landlocked Himalayan nation does things its own way. The monarch introduced the concept of Gross National Happiness 50 years ago. Since then, that underlying principle has influenced the country’s social and economic policy, including tourism provision. So what can you expect from a visit to Bhutan? Here’s a brief introduction to what you need to know. 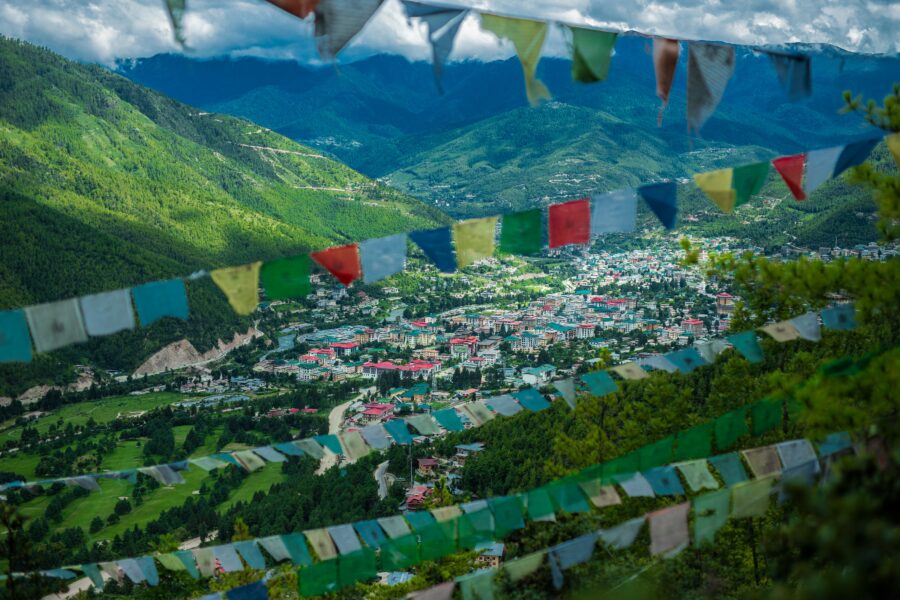 Tourism in Bhutan is exclusive with caps on visitor numbers

Bhutan is about as far removed from a mass tourism destination as you can get. Its government has long been mindful of the cultural and environmental impact that can blight places where tourism is left unchecked. In 2022, the country’s government increased the existing Sustainable Development Fee to $200 per day. The result is a high value, low volume tourism approach. In other words, sites are likely to be uncrowded and visitor numbers at key attractions should remain relatively small. In Sustainable Development Fee revenue helps to fund education, health care, electricity and clean water, increasing living standards for the local population.

Bhutan is home to the highest unclimbed peak in the world 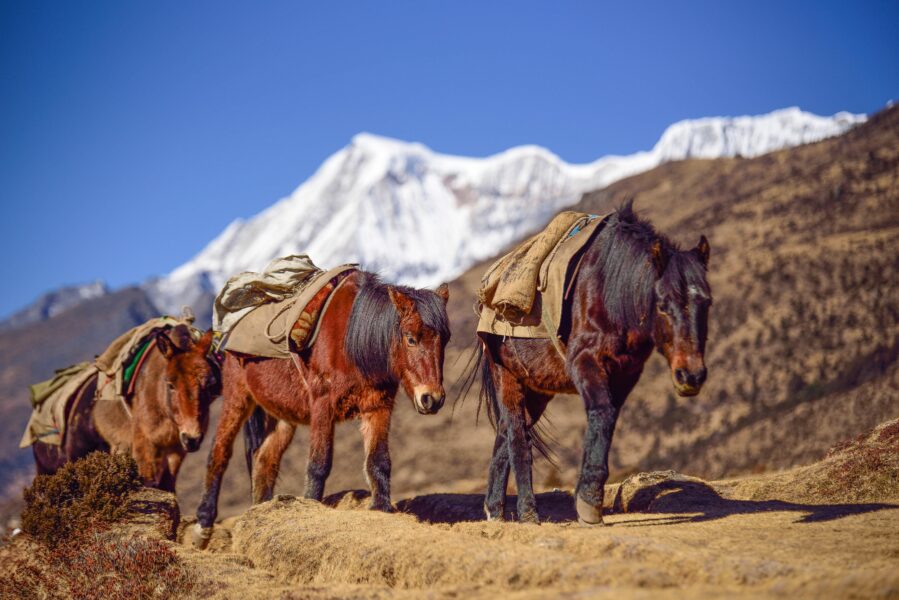 Mountains have spiritual significance to the Bhutanese, so don’t expect to come here and climb mountains. Out of respect for local beliefs, they’ve been off limits to trekking travellers for decades. Highest of all is Gangkhar Puensum, straddling the border with China, which locals refer to as “The White Peak of the Three Spiritual Brothers”. Like all mountains above 6000 metres, it has been protected by legislation since 1994. As attempts to conquer its summit were unsuccessful prior to that, Gangkhar Puensum now holds the distinction of being the world’s highest unclimbed peak. That means it remains pristine and unpolluted, just as nature intended. 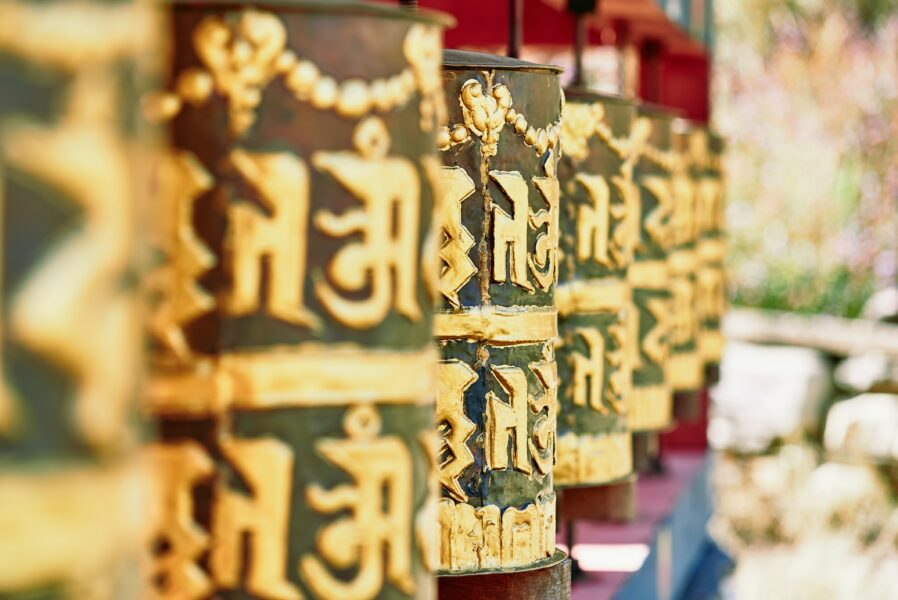 As a staunch Buddhist country, Bhutan temples, monasteries and stupas litter town and countryside. Visitors are welcome, but it’s better to admire these places in silence to maintain their tranquillity and sense of sanctuary. Think carefully before taking photographs; ask permission before snapping pictures of people and avoid taking pictures inside temples. When packing for Bhutan, try to avoid revealing outfits. Take your cue from the country’s traditional dress, gho for men and kira for women. Before you enter a temple, take off your shoes, and if you meet elders, remove your hat. Sit cross-legged, as it is considered rude to point your feet at another person.

What to see and do while you’re in Bhutan

We recommend you include these things to see and do as part of your itinerary.

Trek up to Tiger’s Nest Monastery 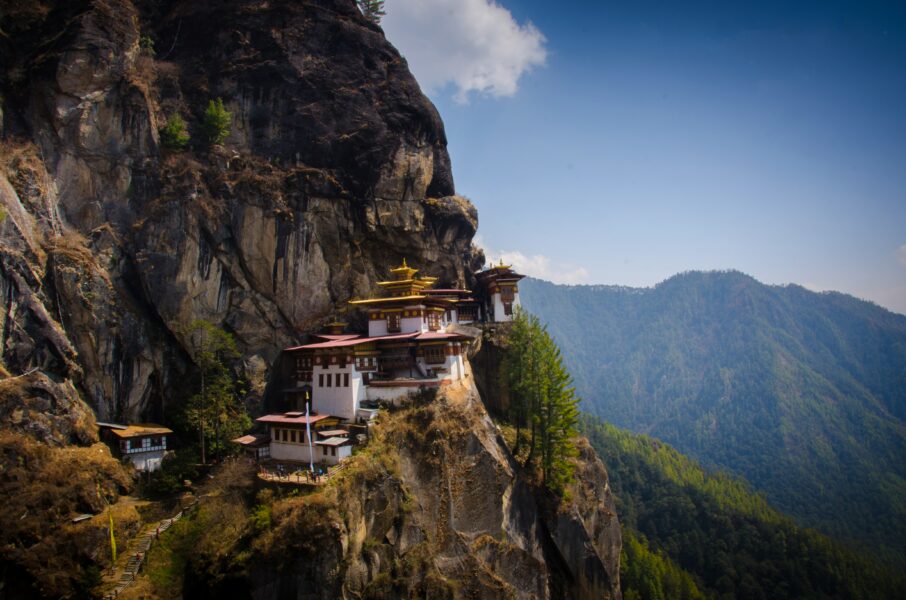 Taktsang Goemba, Bhutan’s most famous monastery, overlooks the pretty Paro Valley. This pilgrimage site is associated with Padmasambhava, also known as Guru Rimpoche. This Buddhist Vajra master was carried up here on the back of a tiger, so that he could meditate in the Taktsang Senge Samdup cave. In the 17th century, many hundreds of years later, a monastery was built at the site. Modern day visitor access is on foot only, via a steep and challenging path, but the reward is worth the lung-bursting effort.

Try your hand at archery

To say the Bhutanese are passionate about archery is an understatement. It is the country’s national sport. Known as da, the tradition goes back 2000 years and is entwined in Bhutan’s history and culture. Archery was once a vital form of defence but images of Buddhist gods holding a bow and arrow also abound. No matter where you go, you’ll find archery fields – even in the smallest villages. Tournaments and competitions take place throughout the year. To see the professionals in action, you could head over to Thimphu’s Changlimithang Arena, the sport’s national stadium and time your visit for the Coronation National Archery Tournament. Alternatively watch a practice session or have a go yourself.

Experience one of Bhutan’s festivals 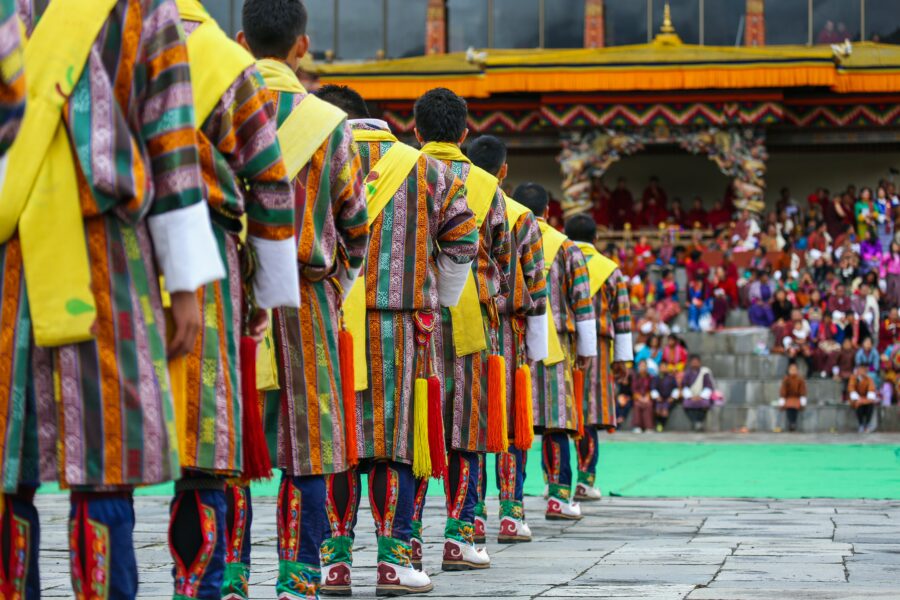 Bhutan goes big on festivals, and they don’t come bigger than Paro Tshechu. It takes place during the second lunar month, usually falling in March. The colourful costumes and masks will have you reaching for your camera, as will the unveiling of a giant silk scroll called a thongdroel. Seeing it is believed to bring enlightenment. Another significant festival takes place in Thimphu during the eighth month of the lunar calendar. Highlights of this delightfully theatrical festival include the “Dance of the Black Hats” and the “Dance of the Terrifying Deities”, as well as jester figures called atsaras whose job it is to bemuse evil spirits and entertain the crowd in the process.

The Trans-Bhutan Trail dates back to at least the 16th century though until recently, it was neglected and overlooked. That all changed in 2018 when this incredible path was restored and now visitors can hike all or part of the 250 mile route which connects Haa in the west to Trashigang in the east. Along the way you’ll encounter gewogs (the name given to groups of villages), many temples and stupas. The path crosses bridges and traverses scenic mountain passes. The landscapes are as varied as they are beautiful, from verdant rice paddies to lush rhododendron forests. There’s no charge to use the trail but the rules state you need to hire a guide. 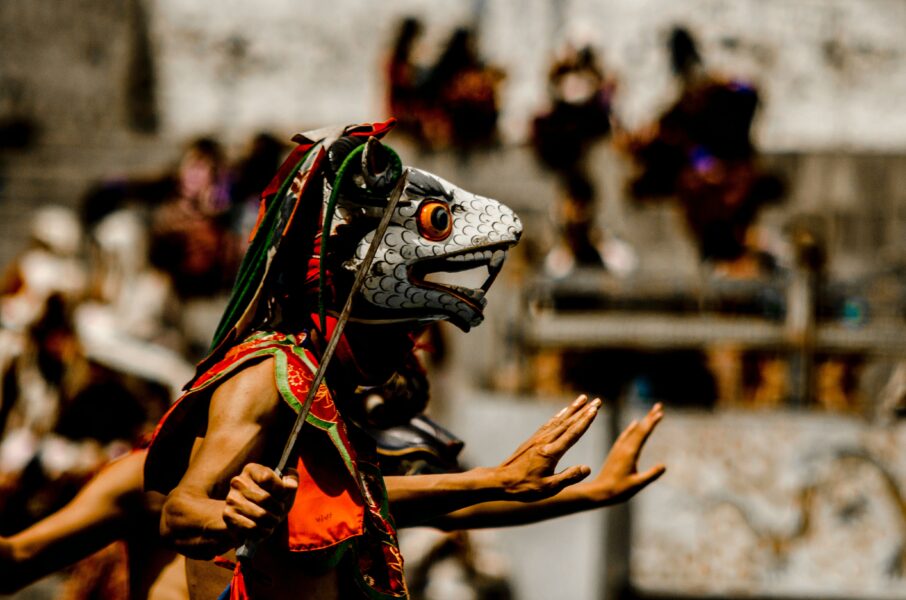 The Land of the Thunder Dragon is waiting. Mundana’s experts are able to make sure you’re up to date on Bhutan’s tourist requirements, from fees to weather. The winter months of December to February form the driest season, with photogenic snow-capped peaks as a backdrop to fluttering prayer flags, but it can be cold, so autumn is also popular. Spring tends to be a little wetter, but an abundance of flowers more than compensates. We can recommend hotels that are the right fit for your needs and arrange transport to get you there and around. You might have an idea of the itinerary you’d like to follow or perhaps instead you would like us to make suggestions.

Bhutan makes a great standalone trip but is also easily combined with other countries in the region such as India or Nepal. Now that you have an idea of what to expect, why not give us a call and let us help you turn your Bhutanese dream holiday into a reality in the coming months?

What to expect from a visit to Bhutan